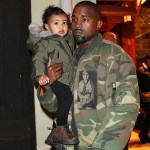 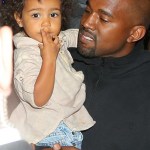 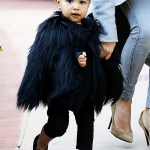 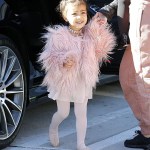 North West (born June 15, 2013 in Los Angeles, California) is the eldest daughter of rapper Kanye West and reality TV star Kim Kardashian. She was born at the Cedars-Sinai Medical Center four weeks early, and weighed just four pounds and 15 ounces. Her name was at the center of plenty of speculation back in 2013, and was initially revealed by TMZ after her birth certificate was leaked. Despite Kim laughing off the idea of giving her daughter the directional moniker on the Jay Leno Show, she was indeed, named North. Given she’s the daughter of one of the most famous people on the planet, North has been followed by paparazzi essentially from the day she was born. Her life has also been well-documented on her family’s reality series Keeping Up with the Kardashians.

The youngster is an incredible big sister to her three younger siblings: Saint, 4, Chicago, 2, and Psalm, 1! The foursome regularly hang out with the other young Kardashian family members — Kim has five siblings, so the kids have no shortage of cousins — and North is particularly close with Kourtney Kardashian‘s eldest daughter Penelope Disick. The duo are serious BFF goals, and are regularly spotted together at all kinds of events, from family birthday parties to the streets of France for Paris Fashion Week!

The stylish tot is truly her mom’s mini-me, and has showcased her immaculate style for years — including when she was a toddler! Thus, it comes as no surprise that North made her runway debut at the age of five. She strutted her stuff at the L.O.L. Surprise fashion show in Pacific Palisades, CA on Sept. 22, 2018. She looked so stylish in a zipper-front black crop top with a red leather jacket and matching skirt. She accessorized with loafers, white calf-length socks, a black handbag and oversized sunglasses. Her mom was also in attendance at the event to cheer on her eldest child

When North isn’t strutting the catwalk, she’s walking hand-in-hand with her mom — and the adorable duo never fail to impress on the fashion front. One of North’s earliest, yet most iconic looks was when she rocked her dad’s merchandise in 2015, while being carried through Heathrow airport by her grandma Kris Jenner. She donned a Yeezy tour jacket, black pants, and red boots. Other times, her and Kim like to coordinate their outfits. In September 2018, they stepped out on the streets of New York City in matching neon ‘fits. Kim opted for a neon pink jacket and matching pants, while North rocked a neon yellow skirt and top.

Trust the daughter of Kim Kardashian to develop a sense of style years before her peers! “North is very girly and has every dress and every makeup palette known to mankind,” a source EXCLUSIVELY told HollywoodLife about North’s fashion sense. “However, she’s also a tomboy and really into nature and the outdoors.” The source added that she’s “very mature” for her age and is helpful with all her younger siblings. “Kim appreciates [it], too. She sees a lot of herself in North.” Well, North is certainly her parents’ biggest supporter!

While attending her dad’s opera, Mary, in New York on December 22, 2019, North wore a white SKIMS outfit from her mom Kim’s newest collection. She rocked the Cozy Knit Pants and Cozy Knit Robe with a sparkling diamond choker necklace — but it wasn’t the outfit everyone was looking at. The best part of her outfit was the accessory on her arm: a $10,000 white Hermes Birkin bag. Talk about a stylish tot!

Besides flexing her fashion prowess, North has also proved she has her dad’s genes and a real aptitude for music. She wowed audiences at the Yeezy Season 8 fashion show in Paris in early 2020 with her debut public rap performance. North busted out a remix of ZaZa‘s “What I Do?” as models walked past her. At one point Kanye walked up behind her, totally beaming over her talent and confidence. North’s mom was absolutely elated and posted a sweet message to Instagram. “I’m so proud of my Northie!!!!!! Her 1st performance had me in tears! She had an impromptu performance on stage at her dads Yeezy Season 8 fashion show! Shout out to @zazathecreator North hopes you like the remix!!!”

In the summer of 2020, North’s father announced he would be running for President against Donald Trump and Joe Biden. During a campaign rally in South Carolina, Kanye broke down in tears and admitted that Kim almost had an abortion when she was pregnant with North. “She was crying… and for one month and two months and three months, we talked about her not having this child. She had the pills in her hand,” Kanye told the crowd. The incident resulted in an initial falling out with Kim and rumors that the two were headed towards a divorce. Ultimately, the reconciled and Kanye was seen spending more and more time with his daughter, North.

The Most Popular Questions About North West

How old is North West?

North West is 7 years old. She was born on June 15, 2013 in Los Angeles, California. She is the oldest child of Kim and Kanye

What is North West’s Middle name?

North West does not have an official middle name, according to a record of her birth certificate. However, her parents Kim and Kanye West do call her “Nori” for short sometimes.

It is unclear if North West and Beyonce and Jay-Z’s daughter, Blue Ivy, are friends, given the rocky relationship their parents have. However, in 2016, Jay-Z even told a reporter “our kids haven’t ever even played together”, when being asked if Blue and North are friends.

What fashion shows has North West been in?

North West made her runway debut on September 22, 2018 at 5 years old, walking in her first fashion show for the L.O.L Surprise Fashion Show in Palisades Park, CA. Kim was on hand to proudly watch her daughter model for the first time.In 2020, North performed during Paris Fashion Week’s Yeezy Season 8 show with her dad, Kanye.

North, Penelope, and Kim Kardashian teamed up for an ’emo girl’ celebration in a recent TikTok, wearing mid-aughts era makeup worthy of a Warped Tour.

Kim Kardashian let off steam with a fun afternoon at the trampoline park with North, Chicago, and Psalm, as Kanye West continues his social media rant.

Kim Kardashian is sharing all the beautiful treasures of her home in a new video, and some of those treasures include her daughter North’s paintings!

Kim Kardashian & her daughter North West looked ready for Valentine’s Day when they rocked head-to-toe pink outfits while out in LA with Penelope Disick.

Kanye West didn’t skip Sunday Service on Super Bowl Sunday and brought his kids North, Saint, Chicago and Psalm after claiming he hadn’t been able to see his kids.