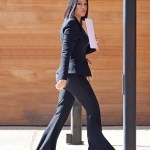 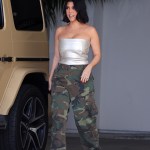 Kourtney Kardashian (born Kourtney Mary Kardashian on April 18th, 1979) is a reality TV personality, businesswoman, model, and actress. She rose to fame after  E!’s hit show, Keeping Up With the Kardashians premiered in 2007. However, it wasn’t her first time appearing on reality TV.

Kourtney actually made a cameo on the earlier E! Network series The Simple Life, which starred her childhood pals Paris Hilton and Nicole Richie. She also appeared on the short lived series Filthy Rich: Cattle Drive, before KUWTK began airing on TV around the world. The hit reality show followed the lives of Kourtney and her sisters Kim Kardashian, Khloe Kardashian, and half-sisters Kendall Jenner and Kylie Jenner, along with other members of their family including ‘momager’ Kris Jenner and her second husband Caitlyn Jenner. No topics were off limits as the cameras followed the family’s personal and professional pursuits, documenting their love lives and glamorous endeavors in Los Angeles. The show quickly became one of the network’s most watched series, and the Kardashians were catapulted to superstardom, not only in the United States, but around the world.

KUWTK quickly spawned various spin-off series, and Kourtney starred in several of them, including Kourtney and Khloé Take Miami, Kourtney and Kim Take New York and Kourtney and Khloé Take the Hamptons. Amid their success in the early 2010s, the trio of sisters launched a clothing boutique called DASH (which closed in 2018), a children’s clothing store called Smooth, and debuted a jewelry line. Among her other entrepreneurial endeavors, Kourtney published their book, Kardashian Konfidential, with her sisters as a tell-all about the famous family. The eldest Kardashian sis also collaborated with half sister Kylie on a makeup collection for her Kylie Cosmetics line. Kourtney also proved she’s environmentally conscious when she participated in a congressional briefing with the organization Environmental Working Group about reforming the cosmetics industry. Perhaps Kourtney’s biggest passion project launched in April 2019: a lifestyle and wellness website called Poosh. The site’s mission was to “educate, motivate, create, and curate a modern lifestyle, achievable by all.” In September 2020, it was revealed that the family’s long-running reality series will air its final season in 2021, after roughly 20 seasons. Kourtney had long voiced her opinions about filming, and spoke out multiple times about wanting to spend more time with her family away from the cameras.

Kourtney was born to parents Kris and Robert Kardashian. Her father was a famous lawyer who defended football star O.J. Simpson during his murder trial. When Kourtney was 10, Kris and Robert divorced, and her mom remarried Olympian gold medallist Bruce Jenner (who would later be known as Caitlyn Jenner). The eldest of the Kardashian clan graduated from high school in Los Angeles and spent two years at Southern Methodist University in Dallas, before transferring to the University of Arizona, Tucson, which was much closer to her California-based family. She received her bachelor’s degree from the college, however the following year in 2003, her father died of esophageal cancer.

Kourtney’s role on KUWTK regularly centered around her rocky relationship with on again/off again boyfriend Scott Disick. The couple began dating in 2006, and now share three children. Their first baby, a son named Mason, was born on December 14, 2009. Two years later Kourtney gave birth to a daughter named Penelope, and in 2014, the couple welcomed a son, Reign Aston, on December 14 — the same day  Mason celebrated his fifth birthday. Scott had long dealt with mental health issues, and was regularly spotted partying in places like Las Vegas and Monte Carlo. Kourt and Scott split in 2015, and she was later linked to French model Younes Bendjima.

Kourtney got into a massive fight with her sister Kim, which stemmed from weeks of tension between the pair. It began during the show’s 17th season, when Kourtney didn’t want to film aspects of her personal life for the reality series, which annoyed Kim and Khloe. “Do you think I want to come into this negative environment every f*****g day?” Kourtney said immediately after her brawl with Kim. “When I don’t see you at filming, you’re completely fine when we’re not in this environment.” When her youngster sister responded, suggesting Kourtney should “go,” she shot back, “I don’t want to be near your fat a**.” At the end of the season, Kourtney was up in the air about whether or not she’d return, but after a month off, she decided to come back. Nevertheless, the show is set to end in 2021.

The Most Popular Questions About Kourtney Kardashian

Of all the men that Kourtney has loved in her lifetime, none hold a candle to her whirlwind romance with Scott Disick, father of her three children and beloved member of the KarJenner family. The two met at Joe Francis‘ house party in Mexico back in 2006, and the rest, as they say, is history. Though they never married, they have stayed incredibly close for nearly two decades and have made co-parenting work for them like no other couple in Hollywood.

Who Has Kourtney Kardashian Dated?

Like most of her sisters, Kourtney has had several serious romances over the years, with also her fair share of flings. Her romantic history includes her first love and father of her kids, Scott Disick; a longterm romance with model Younes Bendjima; an unexpected fling with Justin Bieber; and a short-lived romance with model Luka Sabbat.

In short: yes, Kourtney Kardashian likes Sofia Richie. While there have been hiccups in their friendship, Kourtney has known Sofia since she was childhood pals with younger sis, Kylie. Obviously, things became complicated in September 2017, when Sofia started spending time with Kourtney’s main squeeze Scott Disick. Despite the massive age difference — she was 20, he was 36 at the time — Scott and Sofia got serious quickly and Kourtney did not have the best reaction initially. However, as the years went on, Kourtney came to accept Sofia as a friend again. When Scott and Sofia finally split, Kourtney was disappointed, but not surprised, according to HollywoodLife sources.

The reality star shared a video from Lindsey Harrod on her Poosh website with an amazing, travel-friendly workout routine.

Just over a week after creating a hilarious TikTok video with her mom, Kourtney Kardashian, Penelope Disick took to the video-sharing app to create a video with her dad, Scott Disick, on Dec. 27.

Just one week after celebrating her eldest son, Mason’s 13th birthday, Kourtney Kardashian stepped out without makeup while running errands with her youngest son, Reign.

Khloe couldn’t hide the truth of what she really thinks about Kourtney’s lavish minidress for her wedding to Travis Barker!

Four months after welcoming her second child with Tristan Thompson, Khloe Kardashian revealed whether or not she’s still sleeping with her ex during a lie detector test on Dec. 15.

Kourtney Kardashian went all out decorating her beautiful California home for Christmas this year, with an assortment of massive red trees.