Superstar NFL quarterback Tom Brady, 44, and retired supermodel Gisele Bundchen, 41, have been one of the most good looking power couples of our time. But they almost never came to be, as two months after they began dating, his ex Bridget Moynahan, 50, revealed she was pregnant with Tom’s child. The pair stuck it out and after nearly 13 years of marriage and two children of their own, remain so passionately in love. Gisele was also Tom’s biggest cheerleader through his 22 years in the NFL, which came to an end in Feb. 2022. Here’s the iconic couple’s romantic timeline.

After being set up by a pal, Gisele agreed to meet Tom for a drink. It was love at first sight for the Brazilian beauty. Even though Tom was still in a relationship with Bridget, their two year romance was winding down. “I knew right way — the first time I saw him,” she told Vanity Fair in a 2009 profile. “We met through a friend. The moment I saw him, he smiled and I was like, ‘That is the most beautiful, charismatic smile I’ve ever seen!'”

“We sat and talked for three hours. I had to go home for Christmas, but I didn’t want to leave,” she added. “You know that feeling of, like, you can’t get enough? From the first day we met, we’ve never spent one day without speaking to each other.” She later told Jimmy Fallon in a 2018 Tonight Show appearance, “You know, when I saw those kind eyes, I literally fell in love, like, right away. I was like, ‘What?’ He was just so — you know how sweet he is.” The couple began dating and went public with their relationship a month later

Two months into their romance, the couple faced a major hurdle. Bridget revealed that she was pregnant with Tom’s child, even though they had split up and he had moved on to dating Gisele. It was a tough decision for the model to stay with Tom or break up with him and avoid the drama. “Two months into our relationship, Tom told me that his ex-girlfriend was pregnant. The very next day, the news was everywhere and I felt my world had been turned upside down,” she wrote in her 2018 memoir, Lessons: My Path to a Meaningful Life.

“It was a challenging thing because here I am, you know, thinking, I’m dating this guy, we met, and we started dating and everything is great and then this happens,” Gisele revealed to Charlie Rose on CBS This Morning in 2015. “So, then I felt like I didn’t know what to do. “It was kind of one of those moments of like, ‘Do I just run away?'” She didn’t, and Tom and Gisele remained firm as a couple.

Related: ‘Princess Diaries 3’: Will There Be One? What We Know 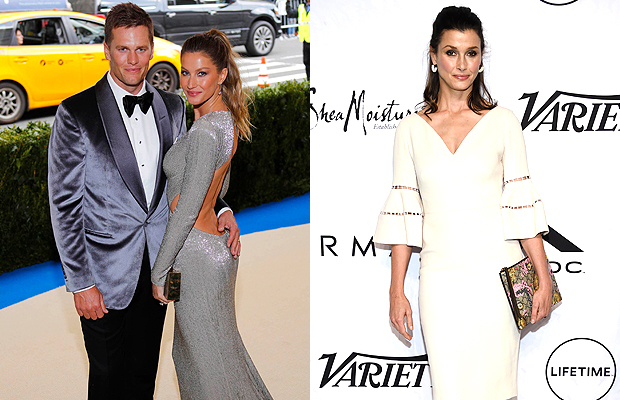 Tom Brady and Gisele Bundchen made it past him becoming a dad by ex-Bridget Moynahan. The supermodel came to love Jack as her own son. Photo credit: AP.

Bridget gave birth to Tom’s son John Edward Thomas Moynahan on Aug. 22, 2007. Rather than it driving a wedge between Tom and Gisele, it made her feel even closer to her man. She absolutely adored Tom’s baby boy, going on to call him in numerous interview her “bonus child.” “[He made] my heart expand in ways I didn’t know was possible,” Bündchen wrote in her memoir about the maternal feelings she had for the boy. “Jack” as he is called, is now a teenager and looks exactly like his handsome father.

After two years of dating, Tom popped the question to Gisele. But he used some trickery to make it a surprise. Gisele finally explained to the world how it all went down during a “73 questions” video she did for Vogue in June 2018. “When he proposed to me, he made up this whole story how my apartment was flooding. And I ran over there to try to fix the situation.”

“When I got there, the whole apartment had candles and rose petals everywhere, and then he went down on his knees to propose, and I’m like, ‘get up!’ because he just had surgery and had three staph infections,” Bündchen said in the 2018 video. “And I was like ‘What are you doing?’ He’s like, ‘I gotta go on my knees,’ and I’m like, ‘No, no, no! Get up, please!’ And so here we are!” She called it the “most romantic” thing Tom had done in their relationship.

Tom  and Gisele weren’t ones for a long engagement, as they got married a month after he proposed. The pair quietly wed in an intimate ceremony on the night of Thurs. Feb. 26, 2009 at St. Monica’s Catholic Church in Santa Monica, CA. Just their parents were in attendance. Her father Valdir Bundchen walked her down the aisle to Tom, who wore a dark suit and grey tie. Gisele donned a figure hugging white lace wedding gown with a wide train, along with a veil with lace accents around the bottom.

They pair later held a second ceremony at her beachside home in Costa Rica in April 2009 for friends and extended family members. Gisele revealed during her Vogue 73 questions that she gave out The Mastery of Love: A Practical Guide to the Art of Relationship by Don Miguel Ruiz to all of their wedding guests, saying it is one of her “favorite books.” 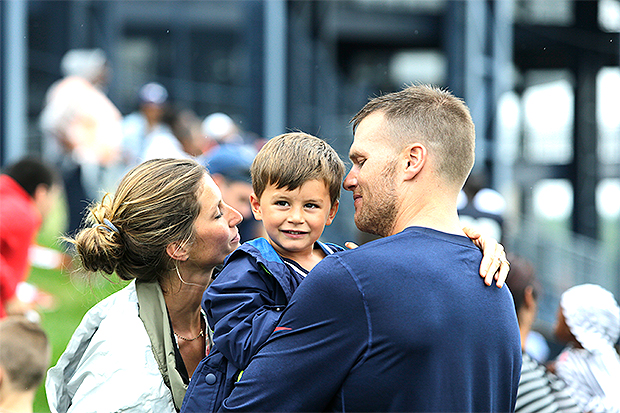 As if a proposal and two weddings weren’t enough to make 2009 special, Tom and Gisele welcomed their first child together, son Benjamin Brady on Dec. 8, 2009. She opted for a home water birth at the couple’s Beacon Street townhouse in Boston, where Benny was born in a bathtub.

“The doctor told me that it was too dangerous for me to have a home birth,” she revealed in her 2018 book  Lessons: My Path to a Meaningful Life. “He said that Benny was in an unusual position, my hips were too small, and the odds just weren’t in my favor.” She said Tom also urged a hospital birth, but Gisele won out, as she wrote that she “always dreamed of giving birth naturally, at home.” 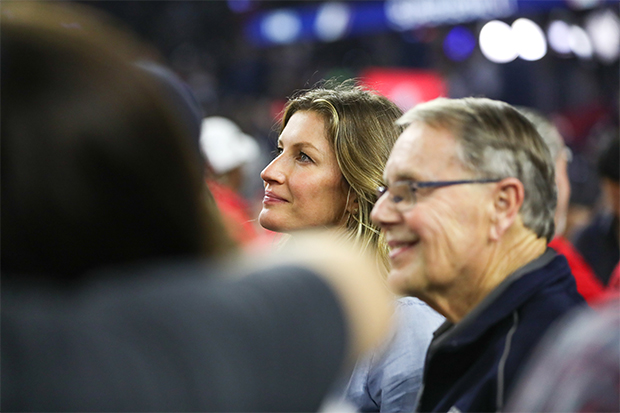 Gisele snapped at reporters when the Patriots lost the Super Bowl in 2012, blaming Tom’s receivers for the loss by dropping too many of his accurate passes. Photo credit: AP.

Throughout their relationship, Gisele has always been Tom’s number one supporter and cheerleader when it comes to his football career. But she seemed to throw his teammates under the bus after the Patriots lost to the New York Giants during Super Bowl XLVI. Tom’s receivers dropped the ball on several key plays that possibly cost them the game, and Gisele was pissed!

“My husband cannot f**king throw the ball and catch the ball at the same time. I can’t believe they dropped the ball so many times,” she yelled to reporters while getting on an elevator after the game. An outburst like that had to have upset Tom with her diss at his teammates, but the pair put on a loving front by heading to Costa Rica on vacation a few weeks later.

Tom and Gisele welcomed daughter Vivian Lake Brady into the world on Dec. 5, 2012. Gisele never announced she was expecting, but paparazzi shots clearly showed her pregnancy leading up to Vivian’s arrival. With Tom’s son Jack and the couple’s son Benny, their family was now complete. The couple did not go on to have any more children after Vivian’s arrival, with three being their perfect number.

While the couple seemed like the picture of bliss to the world, Tom revealed in an interview with Howard Stern in Apr. 2020 that Gisele wrote him a letter in 2018 telling him sharing her feelings of unhappiness in their marriage. His wife felt that Tom spent too much time focused on football and business ventures and not enough time with their family.

“She felt like I would play football all season and she would take care of the house and all the sudden when the season would end, I would be like, ‘Great, let me get into all my other business activities. Let me get into my football training,” Tom told Howard. “And she’s sitting there going, ‘Well, when are you going to do things for the house? When are you going to take the kids to school and do that?’ And that was a big part of our marriage. I had to, like, check myself. Because she’s like, ‘I have goals and dreams too’.” Tom revealed that the pair ended up going to couples counseling to resolve their issues.

2019: Tom and Gisele celebrate 10 years of marriage with loving messages

On Feb. 26, 2009, both Tom and Gisele shared romantic Instagram posts on their 10th wedding anniversary. Gisele shared a wedding photo of the couple staring into each other’s eyes, as well as two shots of them being loving and goofy. She wrote, “I can’t believe it’s already been 10 years since we’ve chose to walk this life together… and what incredible 10 years we’ve had! There is nothing that I love more in this world than you and our family. Thank you for being on this journey with me and for doing the work that it takes to make it so special. May we continue growing together, walking side by side supporting and loving one another for many many years to come. Te amo tanto.”

Tom shared an IG photo of the couple kissing at their wedding after being pronounced husband and wife. He wrote in the caption, “Ten years ago, I didn’t realize how much I could love you and the family we created together. My heart is so full and I am so blessed! I know our journey has not been easy, but the challenges we have overcome have made our bond stronger and our love grow deeper. Thank you for loving me, for supporting my dreams, and for nurturing our family in the way that only you could. You are my rock, my love and my light! I love you and I love our family!” Nearly two years later, the couple is still so madly in love today.

After 22 years in the NFL, and seven Super Bowl wins, Tom announced his retirement from football on February 1, 2022. After sharing the big news via Instagram, he also shared some kind words to Gisele and his three children. “To my wife, Gisele, and my children Jack, Benny andy Vivi. You are my inspiration. Our family is my greatest achievement,” he wrote. “I always came off the, field and home to the most loving and supportive wife who has done EVERYTHING for our familv to allow me to focus on my career. Her selflessness Allowed me to reach new heights professionally, and I am beyond words what you mean to me and our family. Te amo amor da minha vida.”