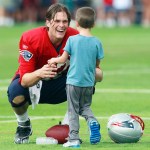 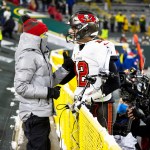 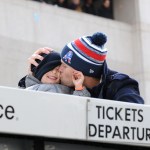 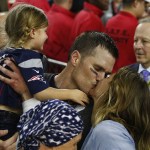 Tom Brady’s son Jack with ex Bridget Moynahan is growing into a spitting image of his NFL superstar dad. Even fans noticed how Jack is the Tampa Bay Bucs QB’s mini-me in a new photo.

Of Tom Brady‘s three children, his eldest son Jack by ex Bridget Moynahan, 48, has become his little twin. While his son Benjamin, 10, and daughter Vivian, 7, with wife Gisele Bundchen, 39, are more of a mix of their parents, Jack, 12, looks nearly identical to his six-time Super Bowl champ dad in a new family pic. Tom shared an Apr. 19 Instagram photo of his dad Tom Brady Sr. and mom Galynn with all of their grandchildren gathered around them. He wished them a Happy 51st wedding anniversary, and many fans couldn’t help but notice how Jack looked like Tom’s mini-me.

“Happy anniversary Mom and Dad!! 51 years of love and unconditional support! And so many beautiful grandkids to show for it! We ALL love you Sssoooo much!!” Tom, 42, captioned the photo. Jack was hard to miss, as he was front and center in the photo wearing a white shirt with blue stripes. His face, hair and gorgeous smile looked exactly like Tom. His half-brother Ben was behind him, wearing a blue shirt and holding a stuffed toy, while Vivi was at the far right end of the table amongst the 10 grandkids.

Fans loved seeing how much Jack has grown into Tom’s twin. User mary_nee wrote, “Omg Jack is YOU sweet Tom! Happy anniversary mr and mrs Brady I’m glad you exist.” Fan maddox.gore added, “Your child looks exactly like you,” referring to Jack as user agc133 agreed, commenting “split image bruh.” kristinlanman pointed out, “I am thinking it’s Jack. Behind him the boy in the blue is Ben. I am guessing! Yes he definitely looks like Tom.” Fan liljamesrunitupp commented, “Well we see tom jr,” referring to Jack. User faithlesperance gushed, “jack is your clone!!!” while nmgsocal added, “Lol Jack your twin.”

Happy anniversary Mom and Dad!! 51 years of love and unconditional support! And so many beautiful grandkids to show for it! We ALL love you Sssoooo much!! ❤️❤️❤️

Some fans scolded Tom for having more than 10 people gathered for the pic during the coronavirus lockdown. The pic appeared to be taken from inside the white marble kitchen of Tom and Gisele’s 12,000 square ft. home in Brookline, Mass, which is up for sale for $33.9 million, after hitting the market in Aug. of 2019 for of $39.5 million. Someone is seen cutting a chocolate cake atop the kitchen’s island, and Jack has a piece in front of him. Tom signed with the Tampa Bay Buccaneers on March 20 after spending his entire NFL career since 2000 with the New England Patriots. The family is in the process of moving to the Sunshine State and are currently renting former New York Yankees great Derek Jeter‘s 30,000-square-foot waterfront home near St. Petersburg.