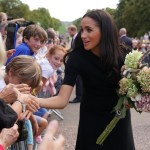 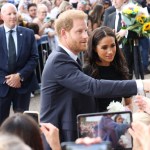 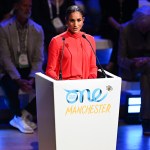 Meghan Markle (born Rachel Meghan Markle; August 4, 1981, in Los Angeles, California) is an American member of the British royal family, a philanthropist, and a former actor. Up until 2016, Meghan was best known for playing Rachel Zane on the USA Network legal drama, Suits. Then, she met a man by the name of Prince Harry. After a year of dating, the two were engaged, leading to a whirlwind romance that would see Meghan and Harry step down from the royal family and seek a life away from the British crown.

Meghan – born to Doria Raglan, a former social worker, and Thomas Markle Sr., a former TV lighting director – grew up around the entertainment industry. Her fathers’ job allowed her to visit the set of Married…with Children as a child. She was educated at private schools in Hollywood, she graduated from Immaculate Heart High School, an all-girl Catholic school (despite being raised Protestant.) She attended Northwestern University, joining Kappa Gamma, and working in community service projects. She studied one semester in Madrid and worked an internship at the American embassy in Buenos Aires. She graduated from Northwestern’s School of Communication with a bachelor’s degree, double-majoring in theater and international studies.

After college, Meghan worked as a freelance calligrapher in between her acting jobs. Her first on-screen appearance was as a nurse in an episode of General Hospital. She made appearances on shows like The War At Home, CSI: NY, and Century City. She was also a “briefcase model” on the U.S. game show Deal or No Deal. Her film work included roles in Get Him to the Greek, Remember Me, and Horrible Bosses. In 2011, she landed the role of Rachel Zane in Suits.

In 2014, she founded the lifestyle website The Tig, where she would write about food, fashion, beauty, and travel. She would bring in experts to help talk about diet, beauty, fitness, and yoga. The site would grow, reaching up to 3 million followers on Instagram, but she shuttered the blog in 2017, due to her growing relationship with Prince Harry.

Meghan was involved with charitable works before she married Prince Harry. She was a counselor for One Young World, speaking at the 2014 summit in Dublin about gender equality and modern-day slavery. She worked with the United Service Organizations to tour Afghanistan and Spain. In 2016, she became a global ambassador for World Vision Canada, traveling to Rwanda for the Clean Water Campaign before traveling to India to raise awareness for women’s issues. She’s also worked with the United Nations Entity for Gender Equality and the Empowerment of Women as an advocate. Since marrying Prince Harry, Meghan has doubled her focus on charitable work. She has partnered with Elephants without Borders and narrated the Disney+ documentary, Elephant, in 2020.

In 2018, she worked with the Hubb Community Kitchen, run by survivors of the Grenfell Tower Fire, She helped put together a cookbook to assist in funding the group, Together: Our Community Cookbook. This was her first charity project after marrying Harry. Following her marriage, she became the fourth patron of The Royal Foundation, along with Prince William, Prince Harry, and Kate Middleton. Though Harry and Meghan had plans to split from the group and start their own charity, their plans were interrupted by their decision to step back from public life as members of the British royal family. In 2020, they announced that their new foundation would be called Archewell. Meghan, being biracial, has been vocal in supporting the Black Lives Matter movement.

Meghan began dating actor/producer Trevor Engelson in 2004. They were married in 2011, but concluded a no-fault divorce in August 2013, citing irreconcilable differences. She had a two-year relationship with celebrity chef Cory Vitiello from 2014 to 2016.

In 2016, Meghan was set up on a blind date with Prince Harry. The two hit it off. By November 2017, Harry had proposed. Meghan announced at the time that she would retire from acting. She was baptized and confirmed into the Church of England in March 2018. In May 2018, she and Harry were married at St. George’s Chapel in Windsor Castle. Upon her marriage to Harry, Meghan became a princess of the United Kingdom and given the title of Duchess of Sussex.

Megan and Harry announced in 2018 that they were pregnant with their first child On May 6, 2019, she gave birth to Archie Mountbatten-Windsor, who is seventh in line to the throne. Harry and Megan decided to not give Archie a Royal title, opting that he grows up a private citizen.

While Meghan and Harry’s engagement was first greeted with favorable coverage, she soon fell out of favor with the notorious British press. She also faced elements of racism both in and outside the British Royal family. Ultimately, Meghan and Harry – whose mother, Princess Diana, died while being hounded by the paparazzi – announced in January 2020 that they were stepping back from their roles as senior members of the royal family. They announced they would be financially independent from the British family and would be relocating to North America.

Meghan Markle was forced to fend off insults from the current President Trump in September 29, after she and Prince Harry urged young people to vote in the upcoming American election. The former royal pair appeared together during Time 100’s celebration via video, and Meghan described the November election ‘the most important in our lifetime’. Shortly after, Trump was asked to comment on their remarks, to which he replied, “I’m not a fan of hers… I wish a lot of luck to Harry because he’s going to need it.” Her response: “if you listen to what I actually say, it’s not controversial.”

The Most Popular Questions About Meghan Markle

Can Meghan Markle Still Be Called the Duchess of Sussex?

Technically, yes. Because she is married to Prince William, her title remains Duchess of Sussex. However, she will no longer be referred to as ‘Her Royal Highness’

Why Did Meghan Markle Leave the Royal Family?

The decision to leave the royal family was a joint one made by Meghan and Harry in January 2020. In their statement to the world, the couple expressed their desire to ‘step back’ from royal life to provide “our family with the space to focus on the next chapter”. Their hope was to “carve out a progressive new role within this institution.”

A new report speculates that the monarch will cover security costs for his brother after he was stripped of his police protection.

The Duke and Duchess of Sussex are reportedly looking for an apology from the royal family in the wake of their bombshell Netflix series.

The Duke and Duchess of Sussex chose a gorgeous black and white photo from their recent trip to NYC for the card. They also opted not to include son Archie or daughter Lilibet.

One week after the ‘Harry & Meghan’ documentary was released, an insider EXCLUSIVELY told HL that the couple has ‘hope’ for ‘healing’ their relationships with the royal family.

The second part of Prince Harry and Meghan Markle’s Netflix docuseries was full of revelations about the royal family, their private life, and more.

Tyler Perry gives a detailed rundown of how Meghan Markle and Prince Harry came to him for help even though they’d never met him before.

Prince Harry opens up about learning Meghan Markle was having suicidal thoughts and admits that he hates himself for how he handled it.