New year, new home! Prince Harry and Meghan Markle are packing their bags and heading to North America! The Royals announced the news in a long statement on Instagram Wednesday afternoon, revealing that they will step back from their royal duties to become more financially independent. — A decision Queen Elizabeth II and Buckingham palace called “complicated” in a separate statement.

“After many months of reflection and internal discussions, we have chosen to make a transition this year in starting to carve out a progressive new role within this institution,” the couple began in a statement shared by the official Duke and Duchess of Sussex Instagram account on January 8. “We intend to step back as ‘senior’ members of the Royal Family and work to become financially independent, while continuing to fully support Her Majesty The Queen.” They went on to explain that their decision has been years in the making.

“It is with your encouragement, particularly over the last few years, that we feel prepared to make this adjustment,” the statement continued. “We now plan to balance our time between the United Kingdom and North America, continuing to honour our duty to The Queen, the Commonwealth, and our patronages.” 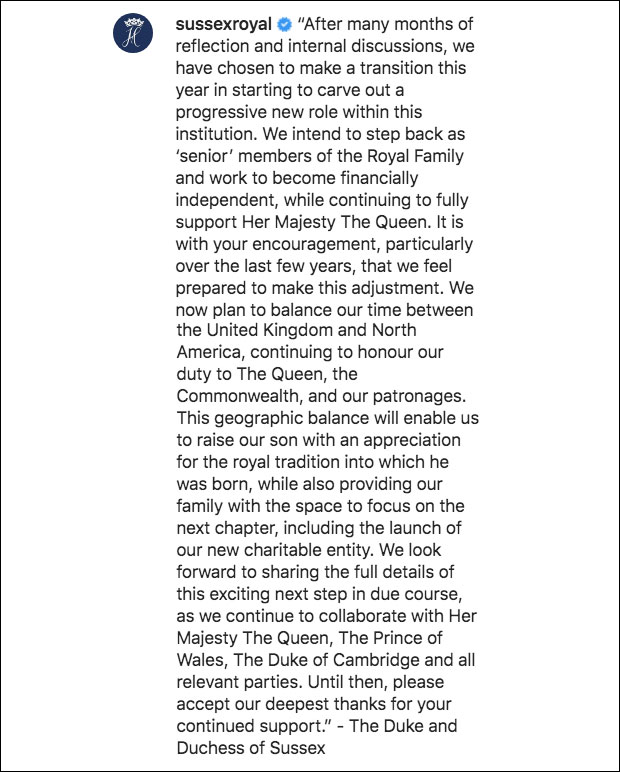 Harry, 35, and Meghan, 38, admitted that the move is in part to benefit their 8-month-old son, Archie Harrison Mountbatten-Windsor.

“This geographic balance will enable us to raise our son with an appreciation for the royal tradition into which he was born, while also providing our family with the space to focus on the next chapter, including the launch of our new charitable entity,” the proud parents explained. “We look forward to sharing the full details of this exciting next step in due course, as we continue to collaborate with Her Majesty The Queen, The Prince of Wales, The Duke of Cambridge and all relevant parties. Until then, please accept our deepest thanks for your continued support.”

The parents of one revealed the news alongside a photo from the their engagement announcement in November 2017. It’s unclear when the Duke and Duchess of Sussex — who tend to march to the beat of their own royal drum — will officially make their journey to North America. The dramatic move is unprecedented in modern royal history.

While news of their move came as a surprise to many, Harry and Meghan have history with the North American country. They spent their first holiday season with son Archie on Vancouver Island, right off the Pacific coast of Canada. Not to mention, the actress lived in Toronto while she filmed USA’s Suits, and often spent time with Harry there before they wed and moved to the U.K. And, the couple’s first appearance together was in Toronto at Harry’s Invictus Games in 2017. Just one day prior to their big announcement, Harry and Meghan visited Canada House, where they thanked High Commission staff for their hospitality during their stay on Vancouver Island.