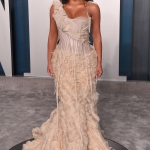 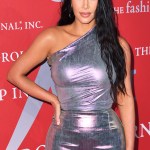 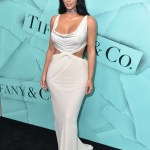 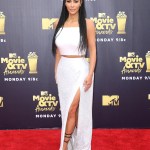 Kim Kardashian (born Kimberly Noel Kardashian in Los Angeles, California on October 21, 1980) is an American television personality and socialite. The daughter of famed attorney Robert Kardashian, who helped defend pal O.J. Simpson in his infamous murder trial, and Kris Jenner, she first became a tabloid fixture as the best friend of fellow socialite Paris Hilton. But that was just the start of things to come.

Kim Kardashian officially made a name for herself after a 2007 sex tape she made with singer and at the time boyfriend Ray J, Kim Kardashian, Superstar, released into the market. From there, with the help of her mom Kris and media mogul Ryan Seacrest, the Kardashian family capitalized on her new fame and an empire was launch with the family’s first and, to date, their  longest running reality show, Keeping Up With The Kardashians.

Keeping Up With The Kardashians follows the lives of Kim and her now equally famous siblings: older sister Kourtney Kardashian, younger sister Khloe Kardashian, her only brother Rob Kardashian and her two younger half-sisters, Kendall Jenner and Kylie Jenner, as well as her mother Kris and her stepfather Caitlyn Jenner (formerly Bruce Jenner). The show’s been on since October 2007 and to date, it has run 18 season on the E! Network.

Along with being a reality star, Kim is also a model, having appeared on the covers of Vogue, Harpers Bazaar, and most famously, Paper magazine in 2014. The winter issue featured Kim on the cover in a photo, titled “Break The Internet,” taken by Jean-Paul Goude. In May 2015, Kim released Selfish, a 400+ page book of selfies.

Kim is also business mogul, launching her own beauty lines KKW Beauty and KKW fragrance in 2017, and her own shapewear line, SKIMS, in 2019. In 2020, Kim announced that she was taking steps to become a lawyer, after lobbying for the release of prisoner Alice Marie Johnson and becoming involved with the politics of prison reform in America. She was set to take the bar exam in California, before the coronavirus pandemic hit.

Kim has been married three times. First, in 2000 when she was 19, she married music producer Damon Thomas. The pair eloped, and quickly divorced three years later. Kim would later confess that she was high on ecstasy during the ceremony.

In May 2011, Kim announced her engagement to NBA player Kris Humphries , after dating only seven months. The wedding was filmed for a special spin-off two episode arc of Keeping Up With The Kardashians on August 20, 2011. Famously, the marriage lasted 72 days as almost a year to the day they started dated, the pair filed for divorce on October 31, 2011. The relationship drew heavy criticism, with many speculating the romance was just a plot for the reality show.

While still legally married to Kris Humphries, Kim started to date rapper Kanye West in April 2012. Eight months later, Kanye announced that he and Kim were expecting their first child together on Dec. 31, 2012. She gave birth to their first daughter North West on June 15, 2013. By October of that year, Kanye and Kim were officially engaged, as he proposed to her in a lavish, rom-com worthy moment after he rented out San Francisco’s AT&T Park to get down on one knee. They got married in Italy on May 24, 2014.

In May 2015, it was confirmed that Kim was pregnant once again, this time with the couple’s first son. She gave birth to Saint West on December 5, 2015. The pair waited until January 2018 to welcome their third child, daughter Chicago, via surrogate, as she suffers from placenta accreta. After the success of using a surrogate, the pair opted to have a fourth child the same way and welcomed Psalm West on May 10, 2019.

Though mostly known for her television and social media success, Kim has also released several singles as a musical artist. In December 2010, Kim put out a single and filmed a music video for a song titled “Jam (Turn It Up)”. The video was directed by Hype Williams and future husband Kanye West makes a cameo in the video. It is believed this is how their relationship began.

In 2011, tired of the constant rumors that her famous backside was payed for, not self made, Kim decided to prove to the world that her butt was legit and got an x-ray of her derriere during an episode of Keeping Up With The Kardashians.  To compare, her sister Kourtney got an x-ray of her breast implants the same day to show the difference.

In a 20/20 interview with Diane Sawyer in April 2015, Kim’s stepfather announced to the world that she was a transgender woman and was legally changing her name. In June 2015, Caitlyn Jenner debuted to the world on the cover of Vanity Fair Magazine. Kim proved to be one of the first of the family to truly embrace Caitlyn’s transition during the two-part special titled, Keeping Up with the Kardashians: About Bruce. Later that same year, Time magazine included Kim on their list of 2015’s 100 most influential people, alongside Lee Daniels, Tim Cook, and Kanye West.

In November 2016, Kim was robbed at gun point while attending Paris Fashion Week with her family. Kim was tied up and gagged by a group of men who forced their way into her Paris hotel room and proceeded to steal nearly $10 million dollars in jewelry. Though thankfully unharmed, production on Keeping Up the Kardashian halted for several weeks and Kanye famously walked off stage during a concert in Queens when he heard the news.

In July 2020, Kanye West stirred up controversy after announcing he would be running for President. During a campaign rally, he told supporters that he and Kim had considered having an abortion when she was pregnant with their first child, North. From there, the rapper let off a firestorm of tweets against Kim and her family, calling his mother in law ‘Kris Jong-Un’ and insisting he was trying to divorce Kim. Citing his bi-polar disorder, Kim responded publicly by standing by her man. “Anyone who has this or has a loved one in their life who does, knows how incredibly complicated and painful it is to understand,” she wrote. A week later, the pair reunited in Wyoming, after Kanye publicly apologized for hurting Kim.

The Most Popular Questions About Kim Kardashian

How Many Kids Does Kim Kardashian Have?

Kim Kardashian has four kids, all with husband Kanye West. The pair have two girls and two boys. Their eldest daughter, North West, was born June 15, 2013. Then, the couple welcome their first son, Saint West, on December 5, 2015. Citing difficulties with her first two pregnancies, Kim enlisted the help of a surrogate to have her last two kids. Chicago West was born on January 15, 2018, and finally, Kim and Kanye welcome beautiful baby boy Pslam West on May 10, 2019.

How Tall Is Kim Kardashian?

Kim Kardashian stands at 5’2. She is the second shortest member of her family, beating out older sister Kourtney Kardashian for the honor as her height is 5’ tall. Her sisters, Khloe Kardashian and Kendall Jenner are both 5’10, and youngest sister Kylie Jenner stands at 5’6.

How Much Is Kim Kardashian Worth?

As of June 2020, Kim Kardashian is closing in a billion dollar empire, being worth $900 million dollars. According to Forbes estimates, the media mogul, model, and aspiring lawyer reached this pique net worth after selling a 20% stake in her cosmetics company, KKW Beauty, to Coty, a global beauty company specializing in inclusive products for skin and hair.

Does Kim Kardashian Have Lupus?

During an episode of Keeping Up With The Kardashians in September 2019, Kim met with her doctor to discuss the possibility of having lupus and rheumatoid arthritis. She had some bloodwork, which was filmed for the show’s season premiere, where she received news that she had tested positive for for rheumatoid arthritis antibodies and lupus. However, after getting a second opinion, it was determined the these results were false and, in fact, Kim was suffering from psoriatic arthritis

Did Kim Kardashian Go To College?

No. Kim Kardashian never went to college; she only has her high school diploma. However, as of July 2020, Kim was studying for the bar exam in California. Despite not having a college degree of any time, California is one of 4 states in America that allows aspiring lawyers to take the bar exam with formal education.

Kim Kardashian showed up to the Met Gala in a black ensemble that covered everything, including her face. She was joined by Balenciaga’s creative director on the red carpet.

Kourtney Kardashian and Travis Barker tried to hide from onlookers by having their hoods over their heads and looking down when arriving at their hotel in New York City.

Kim Kardashian revealed that her son, Saint West, has broken his arm ‘in a few places.’ Kim admitted she ‘cried’ as she dealt with her child’s injury.

While Caitlyn Jenner has achieved much throughout her life, she’s also been the proud father of six kids and four stepchildren, find out more about Caitlyn’s very famous family.

Kim Kardashian was filming an ad on Instagram when her daughter North West interrupted and hilariously accused Kim of talking ‘different’ in her social media videos.