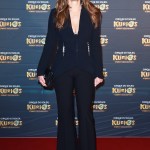 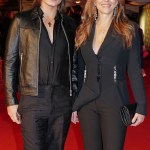 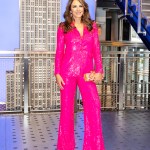 Elizabeth Hurley (born Elizabeth Jane Hurley on June 10, 1965 in Basingstoke, Hampshire) is an English businesswoman, actress and model. The British beauty knew from a young age that she wanted to be a performer, originally aspiring to be a ballet dancer and even attending a boarding school specializing in dance training. Her focus soon shifted to acting during her teens, but she struggled to land any breakthrough roles. Elizabeth did however land a modeling contract after winning a newspaper’s ‘Face of the Year’ competition in the town of Winchester. And things just took off from there!

Elizabeth booked her first modeling job at the age of 29, and it wasn’t just any old gig – she became the face of beauty brand Estee Lauder! Soon after, Hollywood came knocking on her door, and she finally landed her breakout role in Austin Powers: International Man of Mystery. The 1997 flick catapulted Elizabeth to superstardom, as playing the character Vanessa Kensington gave her second billing.

The roles continued to come her way, and she went on to star in films like Double Whammy and Bedazzled, in which she played the Devil, opposite Brendan Fraser. During this period, she also graced the covers of some of the world’s biggest magazines, including Harpers Bazaar, Elle, Marie Claire, and Vogue. Her consistent presence on the big screen, and in print, quickly made her a household name in England and beyond! She also continued to model for Estee Lauder, and although she was replaced by Carolyn Murphy in 2001, Elizabeth continues to work for the brand non-exclusively.

Despite hitting the peak of her career in the early 2000s, Elizabeth made a resurgence on the small screen almost a decade later – and garnered a new legion of younger fans. In 2011, she joined the cast of Gossip Girl during season five. She appeared in fourteen episodes, portraying the media mogul Diana Payne who ran the fictional newspaper The Spectator, and had a relationship with main character Nate Archibald. Elizabeth also took on the role of Queen Helena in E’s The Royals. The show, which premiered in 2015, tells the fictional story about a modern royal family in London.

Her talents extend far beyond acting and modeling, which she proved when she broke into the world of fashion. An astute businesswoman, Elizabeth made a splash on the fashion scene when she launched her swimwear line, Elizabeth Hurley Beach, in UK department stores. Her designs are now sold in stores all over the world – she is the bikini queen after all!

Elizabeth started dating Hugh Grant in 1987, after meeting on a Spanish production called Remando Al Viento. Even though he was arrested with a prostitute in 1995, the two stayed together for 13 years until amicably splitting in 2000. Hugh is even the godfather of Elizabeth’s son, Damian Hurley, who she gave birth to in 2002 with American businessman Steve Bing, which was determined by a paternity test. The pair dated for about 18 months in the early 2000s, and although they were estranged for many years, Elizabeth mourned Steve when he tragically died by suicide on June 22, 2020. She posted a touching tribute to the philanthropist, producer, and film financier, reflecting on the pair’s good times together, and revealed that they had recently gotten close once again. “It is a terrible end. Our time together was very happy, and I’m posting these pictures because although we went through some tough times, it’s the good, wonderful memories of a sweet, kind man that matter. In the past year, we had become close again. We last spoke on our son’s 18th birthday. This is devastating news, and I thank everyone for their lovely messages,” she wrote.

Her son Damian has taken after his mom, making a splash in the modeling world in recent years. He signed with Tess Management model agency in September 2018. Less than one year later, Damian led his very first campaign with British makeup artist Pat McGrath in a series of photos taken to promote Sublime Perfection — a makeup line. He also starred alongside Elizabeth on the small screen, proving he has his mother’s acting chops. Damian played Hansel von Liechtenstein, Crown Prince of Liechtenstein on her show The Royals, appearing in two episodes — one from season three (“Aye, There’s the Rub”) and another in season four (“My New Shall Be the Fruit to That Great Feast”).

Elizabeth went on to marry Indian textile heir Arun Nayar in 2007, with weddings in both England and India. The couple announced their separation in 2010 and officially divorced in 2011. Three months after this, Elizabeth was spotted with a ring and reportedly engaged to Australian cricketer Shane Warne, but they split in 2013 before tying the knot.

Elizabeth is passionate about many charities, and has worked with the Estee Lauder Breast Cancer Awareness Campaign since the disease took her grandmother’s life in 1992. Sales of the brand’s “Elizabeth Pink” lipstick went to charity. She was also named the ambassador of Caudwell Children, an organization for sick and disabled children in the UK, in 2009. She supports the Elton John AIDS Foundation and the City Veterans Network.

Elizabeth is also a social media star, regularly sharing stunning snaps with her more than one million followers. She is no stranger to bomb swimsuit photos, and has proved she’s the bikini queen of summer year after year, posing in all kinds of outfits while on the beach, soaking up the sun.

The Most Popular Questions About Elizabeth Hurley

How Old Is Elizabeth Hurley?

Born on June 10th, 1965, Elizabeth is 55 years young. She was born in Basingstoke, Hampshire which is situated in South Central England, just over an hour outside of London. She grew up with her parents, Angela and Roy, and was the middle child, having a younger brother named Andrew Hurley and an older sister named Kathleen.

Elizabeth has one son, Damian Hurley, who she welcomed into the world in 2002. Growing up in the public eye, Damian has grown up to look exactly like his model mother, embracing her iconic, long brunette hair and inheriting her glamorous facial features. This has caused speculation over whether Damian is transitioning. However, neither her or his mother have commented on this matter.

As of 2020, Elizabeth was not married. Her only marriage was to Indian textile heir Arun Nayar beginning in March 2007. She announced their separation three years later. Their divorce was finalized in June 2011. She did, however, famously date Hugh Grant and have a son with Steve Bing.

English actress Elizabeth Hurley rang in 2023 with a sexy bedazzled bodysuit on Jan. 1, while she celebrated with friends via Instagram.

Elizabeth Hurley rang in the new year in style when she wore a completely sheer bejeweled jumpsuit.

Nothing screams holiday spirit like cleavage – ask Elizabeth Hurley, who rocked a plunging black outfit while sharing a look at her ‘Christmas In Paradise’ movie.

Elizabeth Hurley directly revealed whether or not she’s the ‘beautiful older woman in the countryside’ that Prince Harry reportedly wrote about in his upcoming book, ‘Spare,’ in a new interview.

Elizabeth Hurley revealed she wore a blue bikini from her swim line in her brand-new movie, ‘Christmas in the Caribbean’. She has worn the swimsuit several times this year.

Elizabeth Hurley plays jilted bride Rachel in ‘Christmas In The Caribbean,’ who travels with her bridesmaids on what would have been her holiday honeymoon.

As her holiday movie ‘Christmas In Paradise’ hits theaters, Elizabeth Hurley has returned to paradise to film and produce her son Damian’s first movie.