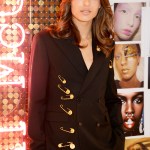 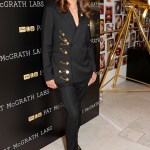 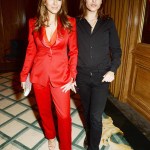 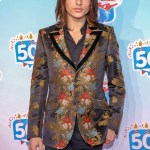 Damian Hurley opened up about losing his father, Steve Bing, just after his mother, Elizabeth Hurley, mourned her former partner. As the 18-year-old model continues to remember his dad, here are five things to know about Damian.

Damian Hurley is processing the terrible loss of his father, Steve Bing, following his tragic death by suicide. The 18-year-old took to Instagram on June 23, reflecting on his father’s passing just after his mother, Elizabeth Hurley, shared her tribute. “Thank you from the bottom of my heart to everyone that has reached out following the devastating news. I’m trying to reply to as many of you as I can, but please know I will always remember your kindness,” Damian wrote to his over 74 thousand Instagram followers. “This is a very strange and confusing time and I’m immensely grateful to be surrounded by my phenomenal family and friends.” Here are five things you should know about Damian Hurley.

2) He’s also an actor. It’s very clear that Damian is following in his mother’s footsteps. So much so, in fact, that he has starred alongside her on the small screen. Damian played Hansel von Liechtenstein, Crown Prince of Liechtenstein on the E! series The Royals, on which his mother stars. He appeared in two episodes — one from season three (“Aye, There’s the Rub”) and another in season four (“My New Shall Be the Fruit to That Great Feast”).

3) Damian was nearly cut out of his grandfather’s trust. In April 2019, Damian and his half-sister, Kira Kerkorian, were nearly taken out of their paternal grandfather, Peter Bing‘s, trust, citing the reason as they were both born out of wedlock. It became an intense family struggle, and Steve got involved on behalf of his children. He even accused his sister of meddling with their father’s trust to ensure that money would not go to Damian and Kira. However, the court ruled in the half-sibling’s favor citing that Peter Bing couldn’t simply change the definition of grandchild to suit his needs.

4) Steve Bing didn’t initially claim Damian as his own son. To say that Damian and his father’s relationship started out rocky would be an understatement. Steve initially denied paternity of Damian after he was born at Portland Hospital in London in April 2002. However, a DNA test revealed that Steve was in fact the father of Damian, and the news became public by June of that year.

5) Damian is incredibly close to his mother. Damian and his stunning mother, Elizabeth, have an incredibly close bond. The 18-year-old has been responsible for some of Elizabeth’s best bikini pics in the past! Throughout his Instagram, there are a slew of pictures of the mother and son pair striking a post or sharing a sweet moment. On her birthday, Damian celebrated his mother by posting a photo of the two and writing the caption: “happy birthday to my twin!! my partner in crime forever i love you mama xxxxxx.”