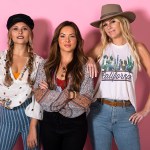 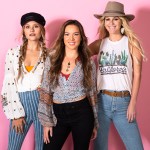 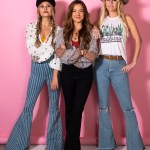 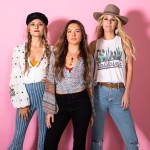 Wine tasting with Carrie Underwood? Sign us up! The ladies of Runaway June reveal their favorite moment on the road with Carrie!

We know that Carrie Underwood is a wine-o, and she invited Runaway June’s Naomi Cooke, Hannah Mulholland, and Jennifer Wayne to join her and husband Mike Fisher for a day at the vineyards during a tour stop in Napa! “That was so fun and Carrie’s probably one of the busiest people on earth, so for her to take time to do that, book some wineries and just have some fun time off the road, away from everything with us and include us in that was just a huge moment,” Jennifer explained in an EXCLUSIVE interview with HollywoodLife. “It was really fun! We all ate dinner together, it was just great.”

Last year, when the ladies visited HL, they were preparing to embark on Carrie’s Cry Pretty: 360 Tour, and revealed they wanted to do two things with the “Love Wins” singer: drink wine and workout. “We have not worked out yet! Just the wine!” Naomi laughed. “She’d probably work me out to my death!” In the midst of their ongoing tour, the ladies of Runaway June also released their first, full-length album on June 28. “It’s so surreal. We were working on it for so long, it’s been four years, and we knew it had to be just right,” explained Hannah. “The stories were there, the album was put together, the timing was perfect. We weren’t really planning for it, but music does that sometimes,” added Naomi.

Their first single from the album, “Buy My Own Drinks,” is creeping up the Country Radio charts, sitting at number 15 currently. The ladies were the first female group to be in the Top 20 in 15 years. “Tt’s crazy for us because we grew up listening to SHeDAISY and the Dixie Chicks saying we wanted to be just like them, and it’s so crazy that it’s been a gap up until we came and did it,” Jennifer said. Naomi continued, “The song is empowering because we’re women, but it’s not directed for women. It’s to tell everyone to remember to love yourself. It’s all internal. Buying yourself a drink is really a metaphor for making yourself happy…I love that we’re being noticed with a song that’s about that.”

Make sure to check out Runaway June’s new album, Blue Roses, out now!