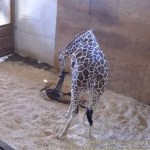 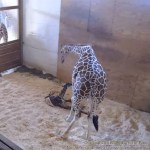 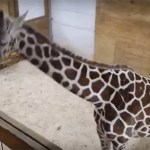 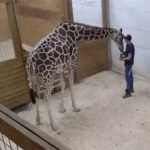 April the Giraffe, the beloved zoo animal who enthralled the world with her pregnancy, just gave birth to her fifth calf on March 16. Congratulations to April and her mate, Oliver!

Finally – and congratulations! The world’s most famous giraffe, April, gave birth to a beautiful baby calf on March 16, and her dedicated fans couldn’t be more excited. April’s calf was born at the Animal Adventure Park in Harpursville, New York, where the giraffes live. April appeared to be doing just fine, as well, in the YouTube video of her in labor. The new calf’s father is Oliver the Giraffe, who fathered her baby born in 2017. What a happy little family.

April went into labor around 11 a.m., and Animal Adventure Park live streamed the birth, with people tuning in for the newborn giraffe’s entry into the world around 12:40 p.m. The park’s Facebook page announced that April was in labor, and directed fans to the live stream event. The calf’s gender remains unknown at time of publication.

Animal Adventure Park confirmed that the 16-year-old giraffe, one of the most popular animals at their zoo, was pregnant in July 2018. The parks owner, Jordan Patch, confirmed the happy news on TODAY, saying, “The results are in and we are having a baby!” He confirmed on the July 25 episode that Oliver was the father, and that April would be giving birth sometime in Spring 2019. She was right on time! April became an instant internet sensation when the live cam in her enclosure went viral. Viewers checked in all day, every day, to keep track of her pregnancy and, hopefully, see her give birth. And they were very invested in this cause, considering she didn’t give birth until about three months after the live stream went off.

That’s nothing, though; the average gestational period for giraffes is about 15 months. April has gone up to 19 months before! She gave birth to a male calf, named Tajiri, on April 15, 2017. The live cam tracking Tajiri’s birth was viewed 232 million times, and 1.2 people watched April give birth. How insane is that? No wonder everyone was so excited to see her new baby this time! Congrats to April and the entire Animal Adventure Park family!