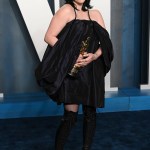 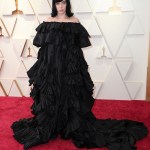 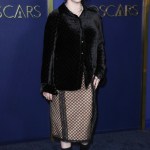 Billie Eilish (born Billie Eilish Pirate Baird O’Connell on December 18, 2001, in Los Angeles, California) is an American singer-songwriter. When Billie uploaded her first song to SoundCloud, who expected that this young star would go supernova. With her history-making, chart-topping, platinum-selling debut album, When We All Fall Asleep, Where DO We Go?, Billie established her as a musical voice of a new generation. Not bad for a teenager.

Billie is the daughter of Maggie Baird, an actress, voice artist, singer-songwriter and screenwriter (she’s Samara in the Mass Effect games), and Patrick O’Connell, a construction worker. Billie’s middle name, Eilish, was meant to be her first name, with Pirate to be her middle name, but her uncle objected to it since pirate has a negative connotation. However, while Maggie was pregnant with Billie, her father, Bill, died, and they named the young girl after him.

Billie was homeschooled alongside her brother Finneas, and she credits him and her mother for inspiring her to get into music. Billie wrote her first “real” song at age 11, and in 2015, she recorded “Ocean Eyes.” Written and produced by FInneas for his band, the duo recorded this version after her dance teacher asked them to produce a track for a dance routine. Afterward, Billie and Finneas published the song on SoundCloud, like they’ve done in the past. However, this time, the song blew up, getting love from various outlets, radio stations, and music personalities. The buzz resulted in Billie signing a deal with Platoon, an A&R company that preps stars before they sign to a major label.

In August 2016, Billie signed with The Darkroom, an imprint of Interscope Records. At the start of the following year, Billie released an EP with four remixes of “Ocean Eyes.” The song would peak at No. 84 on the Billboard Hot 100 in 2019, a year after it was certified platinum by the RIAA.

Billie released her debut ep, Don’t Smile AT Me, in August 2017. It contained singles “Idontwannabeyouanymore,” “My Boy,” “Copycat,” “BellyAche,” and “Watch.” The EP has been credited with putting Billie’s sound in a more dark, alluring direction. Over the next two years, she would continue to build a buzz with performances and high-profile appearances. In April 2018, she collaborated with Khalid for the single, “Lovely,” which was included on the soundtrack for the second season of 13 Reasons Why. The track would also go on to be certified platinum. In January 2019, Don’t Smile at Me reached a billion streams on Spotify, making her the youngest artist to achieve 1B on a project. In March of that year, she released her debut album, When We All Fall Asleep, Where Do We Go?.

The first single from the album was “You Should See Me In a Crown,” and was released in 2018, along with the second single, “When The Party’s Over.” Billie also released “Bury a Friend” and “Wish You Were Gay.” As of 2020, all those singles have been certified Platinum, to a variety of degrees. The fifth single from When We All Fall Asleep propelled Billie onto the next level: “Bad Guy.” Released on the same day as her debut album, “Bad Guy” debuted at No. 7 on the Billboard Hot 100, while her album debuted at the top spot of the Album 200. “Bad Guy” would reach No. 2 (and stay there for nine weeks) before dethroning Lil Nas X’s “Old Town Road” for the top spot.

In the months after her debut album’s release, Billie was everywhere. She also won practically everything. In November 2019, she was nominated for six Grammy Awards, including Record of the Year, Song of the Year, Album of the Year, and Best New Artist. She would go on to sweep those four categories at the 2020 ceremony. In 2020, she released “No Time To Die,” the title track to the James Bond film of the same name. It became the second Bond theme song to top the British official charts and Billie’s first No. 1 single in the UK.

Billie’s trademark fashion sense – baggy, ill-fitting clothes – was created because she wanted to prevent people from body-shaming her. In late 2020, photos of Billie in a nondescript, spaghetti-strap top went viral online, prompting her to advocate for the “normalizing” of “real bodies” online.

She is also an advocate for animal rights and veganism. She was raised vegetarian and became a vegan in 2014. She has also gotten into politics, supporting United States voting rights.

After a viral clip suggested Billie Eilish called Cardi B ‘weird’ at a Met Gala after-party, the ‘WAP’ rapper slammed the ‘drama’ and showed that things were all good between her and Billie.

As always, Billie Eilish made quite the fashion statement when she stepped onto the Met Gala red carpet on May 2!

Billie Eilish revealed her ‘childhood crush’ was Sarah Michelle Gellar in a Q&A Instagram story session she had with fans and the actress didn’t hesitate to response with excitement on her own page.

Billie Eilish made history at Coachella on April 16 as the iconic festival’s youngest-ever headliner and joked about the big shoes she had to fill!

Just one week after her huge night at the Oscars, Billie Eilish returned for another major awards show at the 2022 Grammys, where she was a performer and seven-time nominee.

Music’s biggest night is almost here, and some of the biggest stars – from Olivia Rodrigo to Lil Nas X to Lady Gaga – will hit the stage for the 64th Annual Grammy Awards. Find out who else is performing.

Score a big ‘number one’ for the Bad Guy. After a random hater trashed Billie Eilish’s gown at the Oscars, the ‘No Time To Die’ singer replied with a one-finger salute.