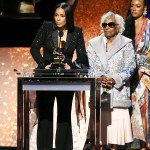 Billie Eilish, 18, graced the Grammy Awards stage for the first time on Jan. 26 and nailed her debut with an electrifying performance.

Billie Eilish, 18, excelled at the Grammy Awards at the Staples Center in Los Angeles on Jan. 26 in front of a star-studded audience with her first ever performance on the show. The multi-colored hair singer made her debut at the glamorous ceremony by nailing a live version of her song, “When The Party’s Over.” Billie shared the stage with her collaborator and brother Finneas O’Connell. The 22-year-old sat at a piano while his younger sister sat on a stool, microphone in hand, giving a haunting but powerful performance of her single. The beauty of the performance was in its simplicity and quiet confidence.

Although – on the face of it – Billie may be experiencing a career high, she recently confessed to CBS This Morning co-anchor Gayle King that she has suffered from soul-destroying depression. In a preview clip of The Gayle King Grammy Special, the Californian told the 65-year-old exactly how negatively success once affected her. “I was so unhappy last year,” she said in the clip that was recorded in 2019. “I was so unhappy, and I was so, like, joyless.” She added, “I don’t want to be dark, but I genuinely didn’t think I would make it to 17.”

Thankfully the singer survived her battle with depression and made it into a 2020 that holds much promise for her. In addition to being nominated for an impressive six Grammys (including for Best New Artist), on Jan. 14 it was announced that the teen had penned the theme song for the upcoming James Bond flick, No Time To Die. The honor not only means that she joins a prestigious club that includes the likes of Adele, Madonna and legendary crooner Tom Jones. It also means that it makes Billie the youngest artist ever to write and record a James Bond theme song. The pop star worked on it with her brother and fellow musician, Finneas.

For Billie’s fans who can’t get enough of her Grammys performance, they’re in luck. The singer is in the middle of a North American tour that will go global in August. In the summer her “Where Do We Go?” World Tour will see Billie perform for her fans in Seoul, Shanghai, Hong Kong, Tokyo and Manila.