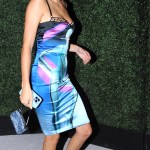 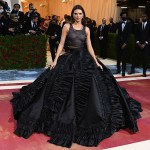 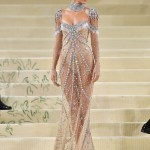 Kendall Jenner (born Kendall Nicole Jenner in Los Angeles, California on November 3 1995) is an American reality star, television personality, and model. She was just a preteen when her family’s reality series Keeping Up With the Kardashians began airing on E! in 2007. She starred alongside her older half-sisters Kourtney Kardashian, Kim Kardashian, and Khloe Kardashian, and younger Kylie Jenner, along with other members of their family including ‘momager’ Kris Jenner and her second husband Caitlyn Jenner. While she was always a constant presence in the show, getting up to mischief with her sister Kylie, or supporting her older siblings endeavors, Kendall really came into her own spotlight when she got her break in the modeling world.

At the age of 14, her mom Kris helped her get signed to the modeling agency, Wilhelmina Models and she began her career modeling for chain retailer Forever 21. She then landed a photo shoot in Teen Vogue and began booking jobs for brands all over the world, primarily in Australia. It didn’t take long for Kendall to graduate to high fashion shoots, and she begin walking in Fashion Week shows around the world.

As Kendall began working with more top brands, she scored spreads in magazines like GQ and Harper’s Bazaar, and even won the Teen Choice Award for Favorite Model in both 2015 and 2016. She topped Forbes’ list of the world’s highest paid models in 2018, and consistently worked with major brands on her social media platforms. Outside of modeling, she has a clothing line with her sister Kylie called Kendall + Kylie which is stocked at Topshop, and she has collaborated with brands on nail polish lines, jewelry lines, and designed shoes and handbags with Steve Madden for his Madden Girl line. In 2016, she was named the face of beauty brand Estee Lauder and collaborated on a makeup line. She would later work with her little sis Kylie on a Kylie Cosmetics collection of products. Aside from her role on the family’s TV series, she has dipped her toe in the waters of acting, having appeared in a 2012 episode of Hawaii Five-O and in Ocean’s 8 in 2018.

Kendall is the daughter of Caitlyn and Kris Jenner. Her father came out as a transgender woman in April 2015, and her family’s reaction to the news was a focal point on the family’s reality series. Unlike most other members of her family, Kendall is notoriously private about her personal life, however she’s been linked to Will Smith‘s son Jaden Smith in the past and briefly dated One Direction’s Harry Styles from Nov. 2013 to Feb. 2014. She’s also reportedly dated Justin Bieber, Jordan Clarkson, A$AP Rocky and Blake Griffin. She has most recently been linked to NBA players Ben Simmons and Devin Booker. Amid the coronavirus pandemic, Kendall and Devin were spotted hanging out frequently. They were even seen on three dates in the space of three days, adding fuel to the fire of their circulating romance rumors.

In 2017, she starred in a Pepsi ad titled, “Live For Now”. The campaign showed Kendall using the fizzy drink to heal the divide between protesters and police, which came under fire for appearing to trivialize the Black Lives Matter movement.

She and Kylie also faced backlash for dropping a vintage tee as part of their clothing line, which showed musicians like Tupac Shakur and The Notorious B.I.G with the sisters’ faces superimposed over the top. They removed the items and issues an apology. Nevertheless, Kendall has also done a lot of charity work! She set up an eBay account where she auctioned off clothes in aid of the Children’s Hospital Los Angeles. She has also worked with No Kid Hungry and The Robin Hood Foundation.

The Most Popular Questions About Kendall Jenner

How Tall is Kendall Jenner?

Kendall stand tall at 5’10, which makes her the tallest of the KarJenner sisters, save for Khloe, who is also 5’10 tall.

How Much is Kendall Jenner Net Worth?

While her sisters Kim and Kylie have reached billionaire status, Kendall isn’t doing bad for herself either. In 2018, she was crowned the highest paid model in the world — for the second year in a row, by Forbes. As of 2019, her most recent net-worth is estimated to be $45 million, earning $12 million that year due to all of her endorsements.

Yes, but only briefly. Though one of her shortest relationships, Kendall’s romance with the One Direction stud still sticks out in everyone’s mind. They first hooked up in 2013 for a dinner date, that blossomed into rendezvouses around the world, including London, NYC, and Hollywood.  With nothing about their relationship confirmed, the couple spent the better part of two years with people guessing if they were or weren’t an item, all without ever being seen together. That is, until the holidays of 2015, where the two were spotted kissing and PDA’ing in the Caribbean. But the love was not meant to last, and shortly after, it was clear that they had split. Still, the two consider themselves good friends now.

Kylie Jenner was hesitant to choose her favorite sister in this must-see ‘2022 Year In Review’ video. Watch it now.

Nearing the very end of her birthday month, Kendall Jenner got back to work & stunned in a campaign for Own Denim on Nov. 30.

Kendall Jenner and Harry Styles sparked romance rumors on and off in 2013 and 2016, and both recently split from their significant others.

The famous trio enjoyed dinner at celeb hotspot Nobu. Each rocked their own signature style.

After both A-listers split up from long-term partners, sources close to the reality star have revealed where the former couple stands.

Following their Oct. breakup, a source told HL EXCLUSIVELY that Kendall Jenner has ‘no issue’ keeping a close friendship with her ex, Devin Booker.