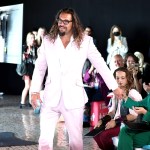 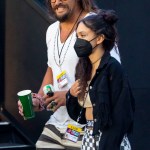 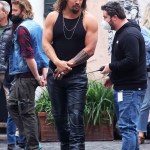 Bio:
Jason Momoa (born Joseph Jason Namakaeha Momoa in Honolulu, Hawaii on August 1, 1979) is an American actor, model, director, writer, and producer. He appeared on numerous sci-fi television shows, including Ronon Dex, Stargate: Atlantis, and Game of Thrones. Jason released Road to Paloma, the first film he wrote, directed, and produced, in 2014. In 2016, Jason will star as Aquaman in Batman vs. Superman: Dawn of Justice, and in 2018 he will reprise the role in a solo film titled after his superhero character.

Best Known For:
Jason is best known for being cast as Aquaman, as well as hie 2011 appearance as Khal Drogo on Game of Thrones.

Personal Life:
Jason married actress Lisa Bonet, infamously known as Lenny Kravitz‘s ex, in 2007. They met in 2005, and they welcomed their daughter, Lola Iolani Momoa, on July 23, 2007. Four months later they wed on Nov. 15, and just over a year after that they welcomed a second child together, their son, Nakoa-Wolf Manakauapo Namakaeha Momoa, on December 15, 2008. Jason is also the step-father to Lisa’s daughter with Lenny, actress Zoe Kravitz.

When it comes to red carpet and street fashion, these ladies completely slay! Representing the men, Jason Momoa, Harry Styles and Rami Malek also made the ultra-exclusive list.

‘Dad bod’? What ‘dad bod?’ Jason Momoa didn’t seem fazed by the recent online teasing over his shirtless body, and he happily offered to ‘show’ it off again.

Hold up: Are people really criticizing Jason Momoa’s body?! The hunky actor is known for his impressive physique but after a new photo surfaced, some are saying he’s sporting a ‘dad bod’ as of late.

The Fendi Couture Fashion Show was a family affair for Jason Momoa and Lisa Bonet, who coupled up to attend the July 4 event with their daughter, Lola.

Jason Momoa recently turned heads when he stepped out shirtless and showed off his amazing body while taking a stroll during a summer vacation with wife Lisa Bonet in Venice, Italy.

Jason Momoa shared some beautiful family memories on Father’s Day by posting a YouTube video of him building a motorcycle for his kids with Lisa Bonet.

Jason Momoa no longer looks like his iconic ‘Game of Thrones’ character Khal Drogo. The actor shaved off his iconic facial hair while advocating for replacing plastic products with recyclable aluminum.