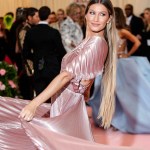 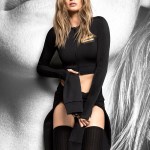 Bio:
Gisele Bundchen (born in Horizontina, Rio Grande do Sul, Brazil on July 20, 1980) is a Brazilian fashion model. Gisele’s career skyrocketed almost immediately, traveling to Cuba, Spain, Japan and New York all within her first two years in the industry. In 1999,Vogue credited her with ushering in “The Return of the Sexy Model,” and Rolling Stone named her “The Most Beautiful Girl in the World” in 2000. Gisele was a Victoria’s Secret Angel from 2000 to 2007, and has been the highest paid model in the world since 2004. Many consider Gisele to be the last true “supermodel” and may become the only model to be a billionaire.

Best Known For:
Bundchen is best know for being the highest-earning model in the world, and for being the wife of 3-time Super Bowl champion, Tom Brady.

Could Gisele Bundchen be any more gorgeous? The world’s most famous supermodel is giving her fans a special treat to commemorate her retirement from the catwalk. She’s posing TOPLESS on the cover of ‘Vogue Paris.’
Gisele Bundchen, 35, decided last spring to stop doing fashion shows in order to spend more time with her family. But that doesn’t mean she’s given up on magazine modeling. Her latest cover shoot is one of her raciest yet! Be sure to take a look.

Oh no. It looks like the marriage of Gisele Bundchen and Tom Brady is seriously on the rocks– and it has everything to do with Deflategate, according to a new report. Things are so rocky that Gisele has even consulted a lawyer!
Tom Brady, 38, and Gisele Bundchen, 35, have been married for over six years now, however, it may all be coming to an end, according to reports. The tension in the relationship has become unmanageable due to Deflategate, the name given to events around Tom’s team, The New England Patriots, deflating footballs of their competitors in January. With Tom currently attending court hearings, anxiously awaiting a ruling, the stress is completely driving he and Gisele apart, to the extent that she’s been having discussions with a divorce lawyer.

Oh no! Gisele Bundchen and Tom Brady’s marriage is reportedly on the rocks! The supermodel and the football legend had a huge fight on Tom’s birthday, according to a new report, and that these two reportedly now mostly talk through text messages.
What everyone thought was the perfect marriage might reportedly be a sham. Gisele Bundchen, 35, and her New England Patriots quarterback husband, Tom Brady, 38, have reportedly kept their growing relationship drama behind closed doors. Their alleged marital problems got too much to bear, and the two supposedly got into a huge fight!

Things are reportedly not good in the Gisele Bundchen and Tom Brady household. A new report claims the longtime couple is experiencing a lot of turbulence in their relationship and it may end in a $460 million divorce battle!
Gisele Bundchen, 35, and Tom Brady, 38, may seem happy in front of the cameras, but a new report is saying otherwise. Behind closed doors, insiders claim the married couple is constantly bickering with each other and their last argument after Tom’s birthday could very well be the one to send their relationship over the edge.

This is too cute! Even though Tom Brady and Bridget Moynahan are no longer together, the two can still share exciting moments in their son Jack’s life. An old email surfaced of the proud parents gushing over their boy — and it just puts a smile on our faces!
Pro footballer Tom Brady, 38, has an adorable family with Gisele Bundchen, 35, and their three kids. Their oldest son, Jack, 7, is actually the son of Tom and his ex, Bridget Moynahan, 44, but the family keeps things cordial. In fact, Tom and Bridget exchanged some sweet emails about their son in October, and they have been leaked for the world to see just what great parents they are!

Say it isn’t so! Gisele Bundchen is officially turning her back on the catwalk! The 34-year-old model will walk in her last runway show during São Paulo Fashion Week. Get the details below.
It is truly the end of an era! After 20 successful years of runway modeling, Gisele Bundchen has announced that she’s had enough and she will be retiring her catwalk shoes after one last show for Brazilian fashion line, Colcci! We know, we’re pretty shaken up too.

Gisele may be the highest paid model in the world but she claims she is super low-maintenance! The 33-year-old balances being a mother and model with style, and all without even brushing her hair! Find out why she doesn’t even own a brush below!
Gisele Bündchen, 33, the new face of Pantene hair products, says she doesn’t even own a hair brush?! Pantene claims to provide “healthier hair with every wash,” so is that why Gisele ditched the bristles? See her beauty secret below and tell us if you think her reasoning is cool or crazy!