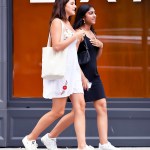 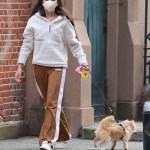 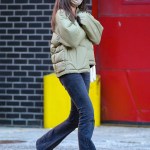 Suri Cruise (born in Santa Monica, Calif., on April 18, 2006) is famous for being the first child of actress Katie Holmes and actor Tom Cruise. Suri’s name means “red rose” in French and “princess” in Hebrew. Her Dawson’s Creek star mom began dating the action movie heavy hitter in April of 2005. They were engaged just seven weeks after meeting, and Katie who was raised Catholic, began studying Scientology, the church Tom famously belonged to. They “officialized” their marriage in Los Angeles, and tied the knot at Odescalchi Castle in Bracciano, Italy on November 18, 2006. It came one month after the first photographs of Suri debuted on the cover of the October 2006 issue of Vanity Fair and sold more than 700,00 copies. Katie and Tom’s mini-me was quickly lauded as one of the most stylish tots on the planet, and as the daughter of the mega-famous couple, she was followed by paparazzi practically from the day she was born.

The protective mom was married to Tom for five and a half years, before she filed for divorce on June 29, 2012. It was reported that she feared her husband would abduct Suri, and cited fear of intimidation by the Church of Scientology among her reasons for divorce. The former couple signed a settlement just 10 days later, and Katie was given custody of Suri when she was just five years old. Although she is the only biological daughter of Tom and Katie, she has two adopted siblings from her dad’s first marriage to Nicole Kidman: a sister, Isabella Jane Cruise, and brother, Connor Cruise. Nevertheless, Suri and her father reportedly haven’t spoken in five years, and it’s not known whether she has any contact with her half-siblings.

Suri attended a private elementary school in Calabasas, California before moving to New York City with her mom and attending a private academy in Manhattan. The school, which also has campuses in Brazil and China, is reportedly the most expensive high school in America. Over the years, reports have surfaced that the teenager misses having her dad in her life. Back in 2018, HollywoodLife reported that Suri was “desperate” to see Tom, given that their only interaction involved him sending gifts on her birthday.

Despite her dad’s absence, it seems the mother-daughter duo are thriving in New York City. The famously private mom-of-one has been spotted out-and-about running errands with her mini-me over the years, however she rarely opens up about her daughter in interviews. In a December 2019 interview with Elle UK, Katie said she “matured” after Suri was born. “I was happy to become a mom in my 20s. It’s been nice that our ages fit. How do I put this? Every age that my child has been and my age at that time has been a good match. We kind of grew up together,” she told the outlet.

Katie also revealed she worries about Suri as she grows up. “Doesn’t every parent [worry about that]?” the Dawson’s Creek alum asked during her profile. “There is so much bad news and hate and things that don’t make sense. The atmosphere around the world is…terrifying.” The youngster has continued to be followed by paparazzi, as she grows up in the public eye, and quickly became known for her impeccable style – even as a toddler! In 2020, amid the global coronavirus pandemic, the duo quarantined in New York City, and were frequently spotted running errands together or dining out. Sometimes they even looked like twins!

The independent teen, who has been spotted out-and-about by herself in recent months, was snapped on July 17, 2020 hitting up Vint & York Eyewear in New York’s SoHo neighborhood, looking very on-trend in a pair of black wide-legged pants. She paired the jeans with a blush pink tank top and a neon pink protective face mask. While Suri was stunning in the trendy pants, her mom was nearby in the New York neighborhood of Nolita wearing the same style! She donned high-waisted, wide-legged jeans in a light wash blue color while running errands. The mother-daughter duo truly are two peas in a pod.

Months after little Suri was born into the world, TomKat’s daughter made her debut to the world on the cover of Vanity Fair. In October 2006, famed photographer Annie Leibovitz shot Tom Cruise and Katie Holmes holding their precious daughter at the Colorado home for the magazine. In the interview, Katie called Suri,”the miracle of our life.”

Since the divorce of her famous parents, Suri has stayed firmly out of the spotlight. Neither Katie or Tom have taken their daughter to any of their film premieres or Hollywood events. However, all that changed December 2017, when Katie and Suri were on hand to introduce one of their favorite performers, Taylor Swift, at the Z100 New York’s iHeartRadio Jingle Ball Concert. It was quite the moment!

The Most Popular Questions About Suri Cruise

Does Tom Cruise have a relationship with Suri Cruise?

As of 2020, it appears that Tom Cruise does not have a relationship with Suri, who is being raised by her mother, Katie Holmes. The last time Tom was seen with Suri in public was in 2012. Though unconfirmed, it’s believed that after her parents divorce, Katie and Suri also left the church of Scientology, which Tom is still a member of.

How tall is Suri Cruise?

Suri is approximately 5 ft and 2 inches tall. Her mother, Katie Holmes, is 5ft and 9 inches, so Suri might be enjoying a growth spirt some time soon.

Where does Suri Cruise live?

Suri lives in New York City with her mother, Katie Holmes. They moved there and have enjoyed a metropolitan life in the Big Apple ever since Katie divorced Suri’s dad, Tom Cruise, in 2012.

Suri Cruise does not have her own Instagram, as of 2020, that is public. In fact, though her mother has a public Instagram, Katie Holmes rarely even posts photos of her teenage daughter on the platform. You can find Katie’s profile under the name “Katieholmes212″.

April 18 is a very special day for Suri Cruise — her birthday! This year, she turns 14, and we’re looking back at her transformation from a little kid to a mature teenager.

Katie Holmes had her luggage ready on a curbside in NYC, looking as though she’s leaving town with Suri Cruise! The photos were snapped on the same day 519 coronavirus-related deaths in New York were reported.

Suri Cruise and Katie Holmes are the cutest mother daughter duo while walking their dogs in Central Park amid the global coronavirus panic.

Katie Holmes opened up about her quest to keep daughter Suri Cruise out of the spotlight and give her as normal a life as possible. And she’s managing to do it in crowded Manhattan, too.

Proud mom Katie Holmes took her mini-me Suri Cruise out for the day in New York City and the pair totally looked like twins.

Suri Cruise is looking more and more like her mom, Katie Holmes, every day! For the Christmas holiday, the pair posed for a black and white selfie and couldn’t have looked more happy or more alike!

Suri Cruise is all grown up! The teen was spotted enjoying a coffee and holding a Sephora bag as she ran errands in NYC.