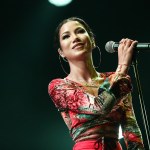 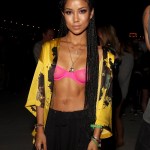 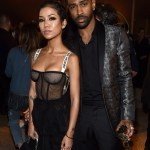 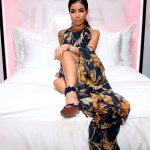 Bio:
Jhené Aiko (born Jhené Aiko Efuru Chilombo on March 16, 1988 in Ladera Heights, California) is an American singer, songwriter and author. Jhené broke into the music industry by contributing vocals to several B2K releases. She was billed as the cousin of B2K’s Lil’ Fizz, but she’s unrelated to him. Her first single as a lead artist, “No L.O.V.E.,” was released in 2002. The video for the track debuted on BET’s 106 & Park when she was just 15 years old. She was set to release her debut album, My Name Is Jhené, in 2003, but tensions at her record label, Epic, led to it getting shelved. After a brief break from the music industry to continue her education, Jhené returned in 2007. She released a mixape in 2011 and in 2012, she opened for Nas and Lauryn Hill on their “Life Is Good/Black Rage” concert tour. She released her debut EP Saily Out in November 2013, and it debuted at No. 8 on the Billboard 200 chart. She continued to record and release new music, leading to her earning three Grammy nominations in 2015 (for Best R&B Song and Best Urban Contemporary Album.) In 2016, she collaborated with rapper Big Sean in a project called Twent88. Their released their debut album on TIDAL. She released her sophomore album, Trip in 2017.

Best Known For:
Her reality TV-empire and her 72-day marriage, as well as her relationship with Kanye West, and their child together, North West.

Personal Life:
Jhené’s mother is of Japanese, Spanish and Afro-Dominican descent while her father is of African American, Native America, German and Jewish descent. Her sister is R&B singer Mila J. Her brother died of cancer in July 2012, and before his death, she recorded “For My Brother.” Jhené dated R&B singer O’Ryan and she gave birth to their daughter, Namiko Love, in 2008. She began dating Big Sean in 2016. She was named PETA’s Sexiest Vegetarian Celebrity in 2016, and posed naked in their anti-fur “Drop The Fur” ad campaign. She cited Tupac as a major influence, and also calls Aaliyah, Eminem, Kid Cudi and Kendrick Lamar as influences.

Jhene Aiko sounded amazing at the Super Bowl as she performed ‘America The Beautiful’ rocking this high slit sequin dress!

Never say that Sarah Michelle Gellar can’t take a joke. The ‘Buffy’ star had a hilarious reaction after someone at the LA Rams game somehow confused Big Sean and Jhene Aiko for Sarah and Freddie Prinze Jr.

You don’t need to be a ‘body language’ expert to know that Big Sean and Jhené Aiko are into each other. These reunited lovers get hot and heavy in his new music video, and they carried that PDA into real life!

Fans went wild over Big Sean and Jhene Aiko’s flirt-fest on Instagram Live — especially when the rapper revealed that he’s planning to marry his on/off love!

After Jhene Aiko dropped her album, ‘Chilombo,’, Big Sean took to Instagram to send her a sweet message, and seemingly confirmed that they’re back together!

Jhene Aiko and Big Sean are still keeping their fans guessing with a new snap that was posted to Jhene’s Instagram story, featuring the pair making funny faces at the camera as they rang in the new year!

Big Sean was spotted wearing an interesting choice of sweatshirt in a recent Instagram story, leading fans to think their romance might be very much back “on”!