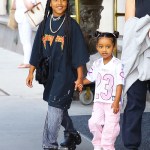 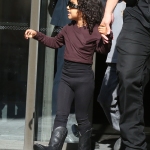 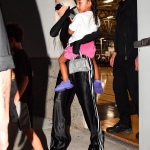 Chicago West is best known for being the youngest child of Kim and Kanye.

Chicago West was born via a gestational carrier after Kim suffered from placenta accreta during her first two deliveries. She is the younger sister of North West and Saint West and is the biological child of both Kim and Kanye even though Kim did not carry her herself.

Chicago West is the sweetest daughter! She sang ‘Happy Birthday’ to ‘mommy’ Kim Kardashian in honor of Kim’s 40th birthday. The video will make your heart melt.

True Thompson, Chicago West and Dream Kardashian had a blast at this arts and crafts party hosted by Khloe!

Are you ready for the next generation of Kimye? Kim Kardashian shared a picture of ‘best friends’ Psalm and Chicago West, and they looked just like baby versions of her and Kanye West!

Kim Kardashian and Kanye West are enjoying family time with all four of their kids — North, 7, Saint, 4, Chicago, 2, and Psalm, 1. Kim shared a number of adorable photos that showed her family outdoors in their matching Yeezy shoes!

Amid marital drama with Kanye West, Kim Kardashian had a cupcake party filled with smiles and kisses with their children Saint, 4, Chicago, 2, and Psalm, 1!

Kim Kardashian shared the sweet and memorable moment between her oldest and youngest daughter in an Instagram post that showed their sisterly love.

Princess Chi is in the building! The 2-year-old daughter of Kim Kardashian and Kanye West dressed in her Monday best — a pink, floral princess gown — in a new photo shared by her mom on September 14!