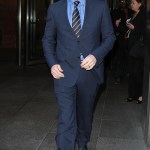 As countries roll out the vaccine for the COVID-19 novel coronavirus, some of the biggest celebrities — like Al Roker, Joe Biden, and more — are protecting themselves against the disease.

The CVOID-19 vaccines rollout continues, and many major A-list celebrities are doing their part by getting inoculated against the coronavirus. With older people at greater risk of requiring hospitalization or dying if diagnosed with the virus, the venerable and experienced have been given priority over the virile and youthful. From presidents (Joe Biden) to monarchs (Queen Elizabeth II) to Hollywood royalty (Dame Judi Dench, Sir Ian McKellen), here is a running list of stars who have gotten a COVID-19 vaccine.

Arnold Schwarzenegger, 73, got vaccinated right on camera! The Terminator actor posted the clip to his Instagram account on Wednesday, Jan. 20 as he pulled up to Dodger Stadium in Los Angeles. Arnold was seated in the passenger seat of the large black vehicle as the vaccine was administered by a visor-wearing nurse via a rolled down window. “Today was a good day. I have never been happier to wait in a line. If you’re eligible, join me and sign up to get your vaccine. Come with me if you want to live!” he wrote. In the video, he joked, “put that needle down” as the vaccine was administered in just seconds.

Watch @alroker get his COVID-19 vaccination live on TODAY. pic.twitter.com/6isXWkWXBT

Al Roker, 66, received his COVID-19 vaccine live during the Jan. 19 episode of the TODAY show, two months after he revealed he’d be diagnosed with prostate cancer. Despite reaching the age requirements to get the vaccine, Al said getting an appointment wasn’t that easy. “All weekend long, I went on the New York state health.gov website and kept logging in and adding my information. I kept logging in, logging in, I finally hit pay dirt Sunday morning, and I got assigned here to Lenox Hill Hospital,” he said.

“That’s how I made it. But it was a constant [process]. I kept hitting refresh, refresh, refresh on the browser and finally got in,” he added. “Luck of the draw.” Before getting the first of two injections, Al asked Lenox Hill medical director, Dr. Daniel Baker, if the vaccine was safe. “The clinical trials really showed its efficacy,” Baker said. “We’ve seen hundreds of thousands of doses since, and everybody’s doing rather quite well.”

Dr. Baker also stressed that those who get the vaccine need to wear their mask still and shouldn’t rely on the public to achieve herd immunity from the virus. “Herd immunity really comes at about 85-90%, and the only way to get there is if everybody goes for the vaccine,” he said. “We’re going to get that 10-15% by people who couldn’t get it because of a medical illness or something along those lines, so we all have to do our part.”

Judi Dench, 86, confirmed she’d received the first dose of the COVID-19 vaccine. “I had one a week ago, so I think my next is something like 11 weeks’ time, that’s a great start!” the Oscar winner said on the BBC, according to The Daily Mail, on Thursday, Jan. 14. The Skyfall actress didn’t indicate if she received the Pfizer or Moderna vaccine, both of which require two doses — but the U.K. became the first western country to begin the vaccinations in Dec. 2020. Judi has been quarantined in the United Kingdom in the last few months, where she learned how to do TikTok videos with her grandson.

Martha Stewart, 79, is another celebrity who recently received the COVID-19 vaccine. The cooking legend took to her Instagram on Jan. 11 to share a video of herself receiving the preventative treatment while sitting down at the Martha Stewart Center for Living at Mount Sinai in New York City. She wrote a caption alongside the video to explain the process and her excitement in getting it.

“I was vaccinated today in a designated vaccine pod near the Martha Stewart Center for Living at Mount Sinai Downtown. I am so proud of and grateful to the doctors, nurses, and medical staff who are wading through the red tape and confusion of the distribution of these very important vaccines,” the caption read. “I am excited to have received my dosage and look forward to the booster. The doctors told me 10,000 applications were received by Mount Sinai right after the state released this batch of vaccines.”

“Here’s to the advancement of science and a heartfelt thanks to those working on the vaccines,” she continued. “We are all hoping for an end to this pandemic. To allay your concerns that I jumped the line, know that I am in the approved age group for this batch of vaccines and I waited in line with others.”

Queen Elizabeth, 94, and her husband Prince Philip, 99, have been inoculated as well. The Royals received the COVID-19 vaccine by a household doctor at Windsor Castle, a representative confirmed to AP. The Queen “decided that she would let it be known she has had the vaccination,” the palace statement, along with confirming they received their first doses on Saturday, Jan. 9. Over 1.5 million UK residents have received the vaccine so far, mainly in high-risk categories.

President-elect Joe Biden also joined the ranks of high-profile individuals who have received the COVID-19 vaccine. The 78-year-old politician received the the Pfizer and BioNTech coronavirus vaccine, which was the first to be approved in the United States, on live TV. At a hospital in Newark, Delaware, Biden chatted with the nurse administering the vaccine and said he wanted Americans to know that it was safe. “I’m doing this to demonstrate that people should be prepared, when it’s available, to take the vaccine,” Biden said. “There’s nothing to worry about. I’m looking forward to the second shot.”

After receiving the injection, he addressed the cameras. “I want to say [that] we owe these folks an awful lot. The scientists and people who put this together. The front line workers, the ones who actually did the clinical work. It’s just amazing… we owe you big, we really do.” Biden also surprisingly gave a nod to the Trump administration. “I think that the administration deserves some credit for getting this off the ground with Operation Warp Speed,” he said, referring to the Coronavirus Task Force set up at the beginning of the pandemic. Kamala Harris, 56, also got vaccinated against the disease.

“I’m doing this to demonstrate that people should be prepared, when it’s available, to take the vaccine. There’s nothing to worry about. I’m looking forward to the second shot.” https://t.co/Wl0trd3fss pic.twitter.com/ZaJzfunUSu

Vice President-elect Kamala Harris received a COVID-19 vaccination in front of cameras as the incoming Biden administration seeks to boost confidence in the inoculation https://t.co/EOAZlJRpwe pic.twitter.com/SKoXwbIsLX

“It’s a very special day, I feel euphoric,” Sir Ian McKellen said after receiving the first of two doses of the COVID-19 vaccine at Queen Mary University Hospital in London, England, per the Evening Standard. Sir Ian, 81, said it was everyone’s duty to get vaccinated and help stop the disease’s spread. “Anyone who has lived as long as I have is alive because they have had previous vaccinations, the take up amongst the older generation will be 100 percent — it ought to be — because you’re having it not just for yourself but for people who you are close to – you’re doing your bit for society.”

“Of course, it’s painless… it’s convenient, and getting in touch and meeting NHS staff and saying thank you to them for how hard they’ve been working is a bonus,” said the Lord of the Rings star. “I would have no hesitation in recommending it to anyone. … I feel very lucky to have had the vaccine.” The United Kingdom was the first Western country to roll out the vaccine, with healthcare workers, the elderly, and people living in care homes getting inoculated at the start of December.

In addition to Sir Ian, Greatest British Bake Off judge Prue Leith, 80, and British rocker Marty Wilde, 81, also received the vaccine. “Having just had my Covid injection, I can honestly say it was an easy experience, if that’s the right word,” said Marty, who is known for being among the first generation of British pop stars to emulate rock and roll. “It was painless, and the staff was great.”

Dr. Jason Wimberly, the husband of Southern Charm star Cameran Eubanks, also got the vaccine. Jason is an anesthesiologist, per Bravo, and has been helping fight COVID-19 in Charleston. “or those wondering, Jason is still standing and Bill Gates hasn’t overtaken his mind…yet. #GratefulForScience #ImJealous #VaccinesWork,” Cameran posted to Instagram on Nov. 17.

The U.S. rollout of the Pfizer-BioNTech vaccine began on Monday (Dec. 14), according to Buzzfeed. In America, the first person to receive the vaccine was Sandra Lindsay, a critical care nurse at Long Island Jewish Medical Center in Queens, New York. She was vaccinated during a live press conference with New York Governor Andrew Cuomo. “I hope this marks the beginning of the end of a very painful time in our history,” said Lindsay, per Buzzfeed. “I feel hopeful today. I want to instill public confidence that the vaccine is safe, we’re in a pandemic, and so we all need to do our part to put an end to the pandemic and not give up so soon.”