Nick Cordero, 41, passed away from COVID-19 complications on July 5 after spending over three months in Cedars-Sinai Medical Center in Los Angeles, CA. The Canadian Broadway actor’s passing was sadly confirmed by his wife Amanda Kloots, 38, via Instagram. “God has another angel in heaven now. My darling husband passed away this morning. He was surrounded in love by his family, singing and praying as he gently left this earth,” she began her caption.
⠀
“I am in disbelief and hurting everywhere. My heart is broken as I cannot imagine our lives without him. Nick was such a bright light. He was everyone’s friend, loved to listen, help, and especially talk. He was an incredible actor and musician. He loved his family and loved being a father and husband. Elvis and I will miss him in everything we do, every day,” she also wrote in her emotional tribute, captioning a black-and-white photo of her husband, which you can see here.

She went on to thank the medical team, who supported Nick and their family throughout the ordeal. “To Nick’s extraordinary doctor, Dr. David Ng, you were my positive doctor! There are not many doctors like you. Kind, smart, compassionate, assertive, and always eager to listen to my crazy ideas or call yet another doctor for me for a second opinion. You’re a diamond in the rough.” 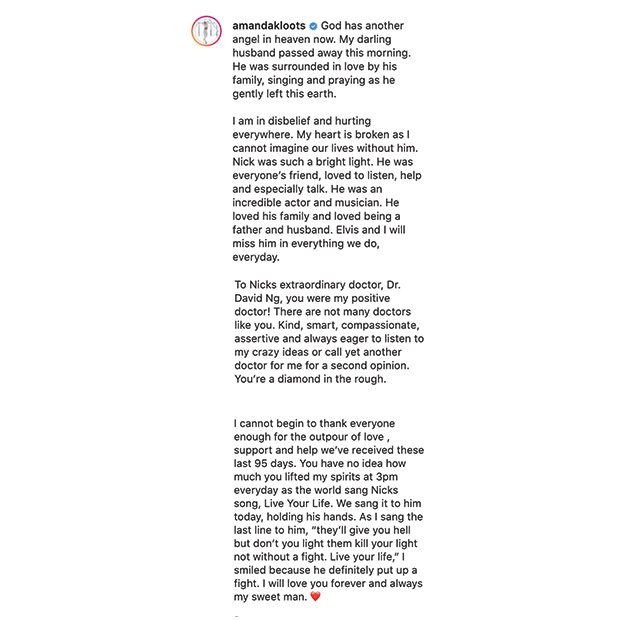 ⠀
“I cannot begin to thank everyone enough for the outpour of love, support and help we’ve received these last 95 days,” she added. “You have no idea how much you lifted my spirits at 3pm every day as the world sang Nicks song, Live Your Life. We sang it to him today, holding his hands. As I sang the last line to him, ‘they’ll give you hell, but don’t you light them kill your light not without a fight. Live your life,’ I smiled because he definitely put up a fight. I will love you forever and always my sweet man,” she also said. The tragic news was first reported by Showbiz411.

Nick’s heartbreaking passing comes after his wife Amanda, whom he married in 2017, took to her Instagram page to share daily updates on his health and start trending hashtags like #wakeupnick and #offthevent as part of a positive movement created with the hopes of a full recovery. She also encouraged followers to sing along to Nick’s 2018 song “Live Your Life” at certain times of the day and reposted several videos of family, friends, followers, and fans proudly embracing the challenge. Some of Nick’s co-stars, including Jonathan Quesenberry and Frankie Grande, from his various productions, also came together for memorable moments such as singing Journey‘s “Don’t Stop Believin'” in a Zoom chat to show their support.

Nick, who Amanda claims was completely healthy before contracting COVID-19, first tested positive for the pandemic in early April after checking into the ER on Mar. 30. By Apr. 1, he was put on a ventilator and was in a medically induced coma shortly after. Complications led to a number of health issues, including “mini-strokes,” infections, and stubborn blood clotting in his right leg, which eventually had to be amputated on Apr. 18. He woke up from the coma on May 12 but continued to have issues with a lung infection.

Our last family photo before Nick got sick. What this man has gone through! Nick is 41 years old. He had no pre-existing health conditions. We do not know how he got COVID-19 but he did. He went to the ER on March 30th and intubated on a ventilator on April 1. Since then has he has suffered an infection that caused his heart to stop, he needed resuscitation, he had two mini strokes, went on ECMO, went on dialysis, needed surgery to removal an ECMO cannula that was restricting blood flow to his leg, a faciatomy to relieve pressure on the leg, an amputation of his right leg, an MRI to further investigate brain damage, several bronchial sweeps to clear out his lungs, a septis infection causing septic shock, a fungus in his lungs, holes in his lungs, a tracheostomy, blood clots, low blood count and platelet levels, and a temporary pacemaker to assist his heart. He has spent 38 days now in the ICU. This disease does not only effect old people. This is real. A perfectly healthy 41 year old man! Bring awareness to his story. STAY HOME! FOLLOW GUIDELINES! This journey with Nick has been the hardest thing we’ve ever had to go through. I ask God for a miracle and my Dad reminded me that God is answering my prayer everyday because he is still with us! Nick is a fighter and has not given up. His doctors and nurses have been truly incredible. Thank you @cedarssinai ❤️ We will get our CODE ROCKY! #wakeupnick

Despite his tragic young passing, Nick leaves behind a lasting legacy with his family and career. He is survived by Amanda and their one-year-old son Elvis and made his mark in the world of theater with a number of productions. He made his debut in the off-Broadway production of The Toxic Avenger, starred in Rock of Ages on Broadway in 2012, and was nominated for a Tony Award for his role of Cheech on Broadway in the 2014 musical Bullets Over Broadway. “The producer kept telling me, ‘Get tough. Get mean. Get angry,’ ” he told the New York Times in 2014. “But I’m a nice guy. I’m Canadian.” Many of his castmates and fellow Broadway stars, including Zach Braff and Lin-Manuel Miranda, mourned his death online.

We’re sending comfort and healing wishes to Nick’s family, friends, and fans at this difficult time.