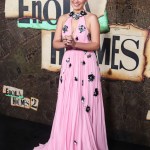 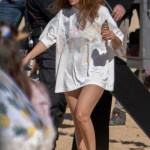 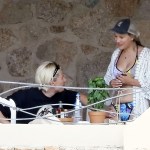 Bio:
Millie Bobby Brown (born February 19, 2004 in Marbella, Spain) is an English actress. At a young age, Millie and her family moved to Orlando, Florida where she enrolled in her first acting class. Always a talented mimic, Millie picked up an American accent by watching the Disney channel in her downtime.

Best Known For:
Millie is best known for her role as “Eleven” on the hit Netflix show Stranger Things, also featuring Winona Ryder. She has appeared on episodes of BBC’s Intruders, Once Upon A Time In Wonderland, NCIS, Grey’s Anatomy, and Modern Family.

Personal Life:
Millie and her two siblings were homeschooled since her family moved around a lot. She is a practicing boxer, and tries to hit the gym every day if she’s not busy with acting. Her boxing coach is a former world champion. Millie has a fear of sharks, and her favorite singers include Adele and Amy Winehouse.

Millie Bobby Brown looked incredible in her green swimsuit as she and Jake took a dip to check out the marine life during their holiday getaway.

Celebrities know how to celebrate Christmas! From Brooke Shields to Millie Bobby Brown — see photos of how Hollywood’s A-list stars are spending the holiday.

The British star has an impressive collection of body art at such a young age! Find out all about Millie’s tattoos here!

Millie Bobby Brown showed off a flawless look as she went makeup-free in her latest series of Instagram Stories snapshots.

Millie Bobby Brown captioned her epic romantic photo, which took place outside on sand, with loving lyrics to a legendary song.

Chris Pratt wore a t-shirt under a vest and jeans as he walked around outside with a shaggy wig, in the eye-catching new snapshots.

Millie Bobby Brown shared some pics from her sunny getaway with Jake Bongiovi, plus an adorable video of him dancing next to a pool. See her post here.