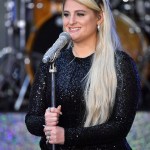 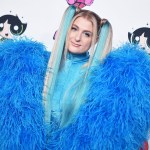 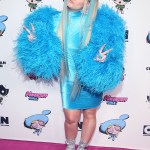 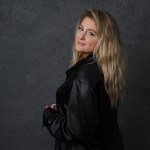 Bio:
Meghan Trainor (born Meghan Elizabeth Trainor in Nantucket, Massachusetts on December 22, 1993) began writing songs at 11. At 18, she signed a deal and began writing songs for Sabrina Carpenter and Rascal Flatts. She self-released two albums in 2011, but didn’t gain notice until “All About That Bass” came out in 2014 and reached no. 1 on the US Billboard Hot 100 chart. When L.A. Reid heard her version of the song, he signed her to Epic so she could release it as a solo artist. She’s released two albums with Epic — Title in 2015 and Thank You in 2016 — and her third album is expected later in 2018.

Best Known For:
Meghan Trainor is best known for her hit song “All About That Bass.”

Personal Life:
Meghan got engaged to Spy Kids star Daryl Sabara on Dec. 22, 2017. He sweetly proposed on her birthday after a little more than a year of dating.

Shanna Moakler Auctioning Off Engagement Ring From Travis Barker: ‘It Was My Dream Ring’

Meghan Trainor is all about those babies! The singer admitted she has so much baby fever 7 months after welcoming her first child, Riley!

Meghan Trainor was at her ‘heaviest’ when she got pregnant with her now 4-month-old son, Riley. She spoke to HL about how he inspired her to ‘change her lifestyle.’

Congratulations to Meghan Trainor and Daryl Sabara! The singer and ‘Spy Kids’ star are the proud parents of darling baby boy Riley after she gave birth on Feb. 8!

Meghan Trainor proved that she was totally ‘kickin’ butt’ in a new video her personal trainer shared to Instagram! Check out the video of the nine-month pregnant celeb lifting weights!

Meghan Trainor is due any day now with her first child. She’s savoring her last days of pregnancy with a gorgeous reminder, in the form of a beautiful maternity portrait.

Weeks after releasing her first Christmas album, Meghan Trainor gave a stunning performance during the 2020 ‘Christmas In Rockefeller Center’ special.

Meghan Trainor and Daryl Sabara’s sex life is temporarily non-existent. The singer revealed in a new interview on November 16, that she, by choice, ‘can’t’ have sex while pregnant, and here’s why…