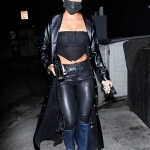 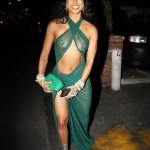 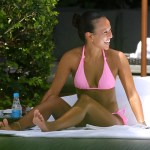 Bio:
Karrueche Tran (born Karrueche Tientrese Tran on May 17, 1998 in Los Angeles, California) is an American model. She first attended Fairfax High School before transferring, ultimately graduating from Birmingham High School in 2006. From there, she quickly began her career in fashion, starting off as a personal shopper. From 2009 to 2012, she worked at Nordstrom in Canoga Park, before working as a freelance celebrity stylist. Kae also works as a model, having posed for brands such as LoveSicc and has appeared on the covers of magazines such as Flaunt, Rolling Out, The Hundreds and more. She has also signed with Wilhelmina Models LA. Transitioning into acting, Karrueche stars in the Emmy-winning web series, The Bay: The Series. She has also appeared in the 2014 TV One movie The Fright Nite Files and in Two-Headed Shark Attack.

Best Known For:
Karrueche Tran is best known as a model, an actress and as the ex-girlfriend of Chris Brown.

Personal Life:
Chris and Karreuche began dating in 2010, his first major relationship following the end of his troubled romance with Rihanna. Chris and Kae were on-again/off-again for a while until March 2015. That month, she discovered Chris had fathered a baby girl, Royalty, with Nia Guzman. Kae ended the relationship. She is of Vietnamese and Jamaican descent and has numerous tattoos over her body.In Sept. 2016, she was reportedly romantically linked with one of Rihanna’s ex, rapper Travis Scott. In Feb. 2017, she got a restraining order against Chris Brown, claiming he beat her up and threatened to kill her. As of December 2017, she is dating Victor Cruz.

Are Quavo and Karrueche Tran giving love another shot? Five years after they were first linked, the Migos rapper and ‘Claws’ actress were spotted having dinner together in West Hollywood.

Karrueche Tran took to her Instagram story to share the latest public pic of Rihanna walking in a stylish all black outfit while letting her baby bump peek through her top.

Karrueche Tran is showing off her killer figure in new photos from a vacation in St. Barts, rocking two different bikinis in the process!

HL spoke to Karrueche Tran, Carrie Preston, and the rest of the ‘Claws’ cast about what fans can expect from the ‘explosive’ final season.

The fourth and final season of ‘Claws’ is coming just before Christmas, and HollywoodLife has all the updates about the final send-off for TNT’s hit show.

Karrueche Tran looked like a real life mermaid when she rocked a completely sheer cutout dress to Doja Cat’s birthday party in LA.

Karrueche Tran looked fabulous when she showed off her toned figure in a tiny pink bikini while in Miami.