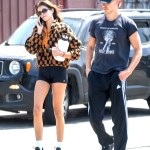 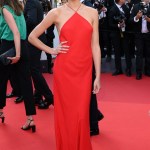 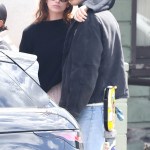 Bio:
Kaia Gerber (born Kaia Jordan Gerber in Los Angeles, California on September 3, 2001) is an American model. She’s most known for resembling her iconic supermodel mother Cindy Crawford, 50, also following in her career footsteps. Kaia landed her first professional gig at the age of 13, signing with IMG Models. The very next year, she scored the high-end, rocker-chic label Chrome Hearts for their spring/summer campaign. She’s since posed for the likes of Vogue, Teen Vogue, and the CR Fashion Book. Kaia appeared alongside her mom on the cover of the April 2016 issue of Vogue Paris. Kaia also starred in her first photo shoot for Love magazine in July, where Kendall Jenner styled and photographed her.

Best Known For:
Kaia Gerber is best known for being the lookalike daughter of iconic supermodel Cindy Crawford.

Personal Life:
Kaia is very close to her brother, Presley Walker. They both spend plenty of time with Cindy and their father, Rande Gerber.

Kaia Gerber went pink for the rest of the summer! The model revealed her new pink hair makeover while out to dinner in Malibu on Aug. 16.

Models Kaia Gerber and Cara Delevingne are ‘solemates’ when it comes to their foot tattoos. Kaia shared a close-up photo of their new matching ink in celebration of Cara turning 28.

Cindy Crawford or Kaia Gerber? It’s honestly to tell who’s who in this gorgeous pic the supermodel mom posted of her relaxing summer day!

Kaia Gerber showed off her toned midriff in a black crop top and high waisted jeans when she stepped out for dinner with pal Tommy Dorfman.

Another week in quarantine has come & gone but that didn’t stop some of our fave stars from looking their best! From Dua Lipa to Kaia Gerber, we rounded up all of the best dressed celebrities of the week!

Cara Delevingne and Kaia Gerber cozied up with one another months after the model and former girlfriend Ashley Benson headed to splitsville.