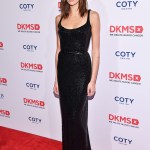 Like mother, like daughter: Kaia Gerber recreated mom Cindy Crawford’s ELLE cover circa 1994 for the December 2021/January 2022 issue of the magazine. The young model, 20, wore a Ralph Lauren American flag sweater reminiscent of the one that her mom, 55, wore in her own cover in the ’90s, even mirroring her pose with her hands in her pockets, as seen in the photos here.

Proud mom Cindy shared a side-by-side of the photos on Instagram for a Flashback Friday post on Dec. 10 and captioned, “Baby stole my look! @elleusa now and then.” The resemblance is uncanny, so much so that the veteran supermodel’s Instagram friends had to do a double take. TV personality and fashion photographer Nigel Barker commented, “Wow I actually thought that was you for second Cindy!! Had a total double take!!”

Along with Kaia, Cindy also shares son Presley, 22, with husband Rande Gerber, whom she’s been married to since 1998. For the March 2021 issue of Red magazine, the supermodel revealed the secret to her decades-long marriage. “Friendship,” Cindy said. ‘With my husband, I feel even if we weren’t together, we’d be friends. Of course, you have to have sexual chemistry, but our relationship is based on friendship and mutual respect.”

Cindy Crawford Through The Years -- Photos 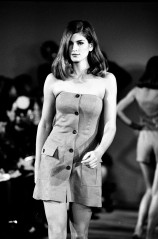 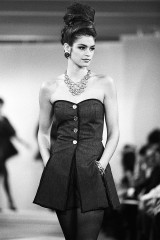 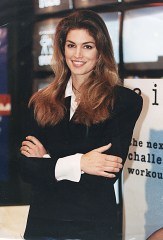 She also called parenting the “hardest” but “most rewarding” job. “Rande and I made our kids feel included,” she said. “If we had friends over for dinner, they sat with us and I think that’s served them well. They’ve always been comfortable being around older people and asking questions. What could I do better? Probably not offer help unless it’s asked for.”

Cindy continued, “You want to do everything for your kids, but when I stand back and they come to me for advice, they’re more likely to listen. When I offer it unsolicited, it just annoys them.” No surprise here, but modeling runs in the family: Cindy’s son Presley is also a model, having walked runways at Paris Fashion Week.

While speaking to Net-A-Porter’s digital magazine in 2019, Cindy revealed how she feels about her kids, namely Kaia, following in her footsteps. “It was a good thing that she couldn’t work on the runway until she was 16,” she said. “There are laws about that. After that I couldn’t really hold her back. You hope that all of the advice and guidance and role modeling that you did sticks. That’s the stage of parenting when you think, ‘OK, hope you can fly!'”