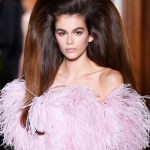 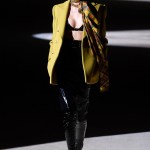 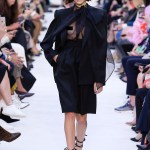 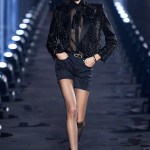 In the aftermath of her reported breakup with Jacob Elordi, Kaia Gerber got back to work and absolutely nailed her latest modeling gig. The 20-year-old is on the cover of the December 2021/January 2022 issue of ELLE, and she looks nothing short of spectacular. Kaia, who is the daughter of supermodel Cindy Crawford and businessman Rande Gerber, rocked a see-through mesh bodysuit, accompanied with a blue feathered trim, for the remarkable cover snapshot. But that’s not the only chic outfit that Kaia amazed in for the photoshoot!

The new issue, which hits newsstands December 7, also features Kaia wearing lace tights and matching suspenders, which was arguably her most racy look. The beautiful brunette was also snapped wearing a black suit and a sheer bra in one shot, while another photo showed Kaia glowing in a see-through crystal dress.

Kaia also sported some professional attire for the shoot. The model suited up, as the publication put it, in a black and white tuxedo with a black bowtie, red belt, and sky-high platform boots. For a different shot, she put a fun twist on the traditional black-tie dress code from Bottega Veneta, all the while looking drop dead gorgeous. 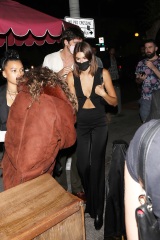 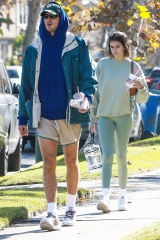 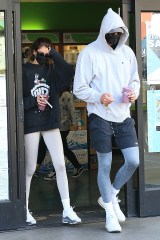 Kaia’s photoshoot for Elle was published on Nov. 23, just five days after a source told Page Six that the model had split from Jacob, 24, after over a year of dating. The pair haven’t yet confirmed the news, but Kaia may have hinted that the breakup is indeed true by taking photos of herself with Jacob off of her Instagram. Per Page Six‘s source, Kaia’s split from The Kissing Booth actor was “amicable.” HollywoodLife has already reached out to representatives for Kaia and Jacob for comment.

Kaia and Jacob first sparked romance rumors in September 2020, when the pair were seen holding hands in New York City over Labor Day Weekend. They were later spotted heading to the gym together on September 9. Things were getting pretty serious as the couple started to be seen, because near the end of September, Jacob joined Kaia and her parents on a family trip to Mexico. This past June, the couple appeared to be having a great time while attending a friend’s birthday party.