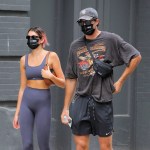 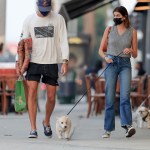 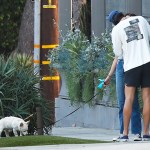 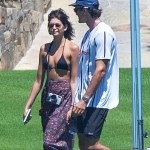 While continuing her Mexican vacation with Jacob Elordi, Kaia Gerber hit the pool in a bikini top and long skirt for a stroll alongside her man.

Kaia Gerber and Jacob Elordi are heating things up in Mexico! The hot new couple is on vacation with Kaia’s parents, Cindy Crawford and Rande Gerber, in Los Cabos, and they were photographed strolling through their private villa together on Sept. 23. Kaia looked amazing in her bikini top and skirt, and she held tight to Jacob as they walked around. Both stars also wore sunglasses amidst the hot Mexico sun.

It’s unclear when Kaia and Jacob actually got together, but things definitely seem to be escalating quickly for the pair. They were first spotted out to dinner with friends at the beginning of September, which was followed by an outing in New York City on Labor Day (Sept. 7). Fans witnessed the two holding hands and sitting on a park bench together, and the photos created major buzz online about the status of this relationship.

After that, the young stars weren’t shy about showing affection toward one another in public. On another New York outing, they were photographed by paparazzi while holding hands. They were also pictured arriving back at Kaia’s apartment after a dinner date, and even enjoyed a gym session together. Ahead of the Mexico trip, photographers caught them heading to JFK Airport to catch their flight, as well.

This hot romance comes following other high-profile relationships for both stars. Kaia famously dated Pete Davidson earlier this year, but he revealed that he ended the romance amidst his personal struggles, which resulted in a rehab stay. Meanwhile, Jacob previously dated Joey King, who he starred in The Kissing Booth with, and Zendaya, who he was on Euphoria with.

Earlier this week, Zendaya took home an Emmy Award for her role on the show, and Jacob sent her a sweet congratulatory message on Instagram. He also filmed The Kissing Booth 2 with Joey after their split, so it appears he’s on amicable terms with both exes. However, Kaia seems to be the only woman he has eyes for in the romance department these days!