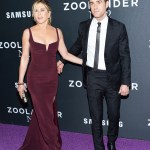 Bio:
Justin Theroux (born on August 10, 1971 in Washington, D.C.) is an American actor, director, and screenwriter. Theroux is well known for his work with director David Lynch in his films Mulholland Drive (2001) and Inland Empire (2006). He had guest roles on TV in shows like Alias, Ally McBeal, Sex and the City, Six Feet Under, and Parks and Recreation. In 2006, he directed his first film Dedication, which was shown at the 2007 Sundance Film Festival, and he tried his hand at screenwriting for Iron Man 2 and Tropic Thunder. He recently starred in the HBO show The Leftovers and had a minor role in Star Wars: The Last Jedi.

Best Known For:
Justin Theroux is best known for his acting roles and his relationship with Jennifer Aniston.

Personal Life:
Justin dated model Heidi Bivens for 14 years before becoming involved with Jennifer Aniston in 2011. Justin and Jen began dating after working on the movie Wanderlust together. They got engaged in Aug. 2012, and were married three years later. However, they announced their separation in Feb. 2018.

Jennifer Aniston and Justin Theroux dined with Howard Stern and others on Friday, and a photo taken that night made its way online and had fans hoping for a rekindled romance.

Jennifer rocks an ‘I’m A Cool Blonde’ sweater as she lights up what appears to be a cigarette in the since-deleted clip from Justin.

Friendly exes Jennifer Aniston and Justin Theroux reunited for a star-studded ‘The Facts of Life’ table read ahead of the ABC special.

The ‘Friends’ star and her ex-husband are obviously still very close, as she shared a shirtless photo of her

Justin Theroux reveals in a new interview that he and ex-wife Jennifer Aniston still have so much love for one another, even after divorcing.

Justin Theroux sent Jennifer Aniston a beautiful message on her 52nd birthday, sharing his love for his ex-wife on Instagram an using a special pet name!