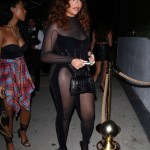 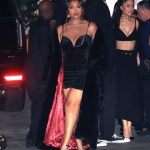 Jordyn Woods (born September 23, 1997) is an American social media personality and model based in Los Angeles, California. She is best known for her friendship with former BFF, businesswoman and reality TV star Kylie Jenner. Jordyn had a falling out with her pal, and the rest of the Kardashian-Jenner family after she was seen cozying up to Tristan Thompson, the father of Khloe Kardashian‘s daughter. She is now focused on her relationship with her own family, and her career as a model and social media star.

Jordyn Woods was born into an entertainment family. Her mom, Elizabeth Woods, is a brand manager and photographer, while her father, John Woods was a sound engineer on “The Fresh Prince Of Bel Air” which starred close family friend Will Smith. John sadly passed away following a battle with cancer in 2017.
At the age of six Jordyn began modeling, and was signed to Ford Modeling Agency. She moved to the Los Angeles neighborhood of Calabasas at the age of 13, and became fast friends with Kylie Jenner, whose family was gaining prominence from their new reality show Keeping Up With The Kardashians. As a teen, Jordyn gained prominence on the video app Vine before moving over to Instagram where she has accumulated more than 11 million followers. She has also acquired huge followings on Twitter and YouTube, and thanks to her social media presence she was able to land a modeling agent. She was contacted by the prestigious modeling and talent agency, Wilhelmina International, and struck a deal with the agency to pose for ‘Wilhelmina International’s Curve,’ the agency’s division for plus-size models. Jordyn quickly became the face of the plus size industry in the United States, and was one of the most sought after models in the world.
She opened up about body image on social media, and also in interviews, telling Teen Vogue in 2017, “It takes time to come into yourself and realize your worth and realize your place and try to fit in, and for some people, it doesn’t happen until way later in life, but, luckily for me, I realize I am around people, and I can’t try to be like anyone else because I am me, and that’s what’s cool about me,” she said, adding, “No one else is me, no one else looks like me, has my body type, and I don’t look like them, so why would I try to fit in these standards and fit in this clothing? If I feel good about myself, then no one can really say anything to me that will affect me.”
Her positive attitude, and stunning ad campaigns helped her land collabs with major fashion and beauty brands. She created her first collaboration in 2016 with online retailer Boohoo, saying that she “wanted to keep every girl in mind whether she was curvy or skinny.” The following year, she collaborated with plus-size brand Addition Elle, and made her New York Fashion Week debut. She walked in the spring and summer 2018 Chromat show, which was dubbed a groundbreaking moment for plus size women in the fashion industry.
Jordyn has also shown off her talents as a businesswoman, launching Secndnture, a size-inclusive activewear line, in August 2018. According to the brand’s website, the collection is made for “gym to street” style and offers products like leggings, sports bras, and bodysuits in sizes XS to 2XL. “As a curvy woman, it’s harder to find good, cute clothing that inspires you to actually want to work out. Once I realized there was a demand for activewear, I thought, why not make my own?,” she told WWD. Jordyn also went on to partner with beauty brands like Too Faced, Eylure, and Kylie Cosmetics — before their very public friendship breakup.
She and Kylie revealed their collaboration in September 2018, which included an eye-shadow palette, two lip glosses, a lipstick, and a highlighter palette with product names including: Wife Life, Loyal, True Love, Soul Mate, My Heart, Don’t Ever Leave Me, Sister, Ride or Die, Marry Me, Wild Love, and Love You B*tch. Jordyn was also a staple on the family’s reality show and Kylie’s 2017 offshoot Life Of Kylie. Of course, things eventually turned sour — but more on that below!

Jordyn Woods grew up just north of Los Angeles in Oak Park, California and she moved to Calabasas at the age of 13. Her family was close with the Smith family, and she’s even referred to Will Smith as her “uncle”. It’s believed his son Jaden Smith introduced her to Kylie the summer before they began high school, as they later revealed they had been inseparable since eighth grade. Their friendship was well-documented on Instagram, and on TV as Jordyn made frequent appearances on the family’s reality show. She was even on the guest list of Kanye West and Kim Kardashian’s star-studded wedding in Italy.

When Kylie fell pregnant in 2017, to then-boyfriend Travis Scott, Jordyn was among the few people in the world who were part of Kylie’s inner-circle. Somewhat miraculously, she and the KarJenner family helped conceal Kylie’s pregnancy for months, until she gave birth to little Stormi in 2018. Her relationship with the family went south in February 2019, when she was spotted cozying up to Tristan Thompson, the father of Khloe Kardashian’s baby, at a party. Cheating rumors began circulating, however she was adamant that she and Tristan never slept together. Jordyn later apologized for the kiss in an interview on Jada Pinkett Smith‘s Red Table Talk. “I’m no home-wrecker,” she tearfully said in the interview. “I would never try to hurt someone’s home, especially someone that I love, and someone who has a beautiful daughter. I never tried to steal someone’s man.”

She has since moved past the drama with the Kardashian family, and has a new man in her life: NBA star Karl-Anthony Towns. A source close to Jordyn spoke to HollywoodLife exclusively about how the pair went from friends to lovers so quickly in the summer of 2020. “Jordyn and Karl were friends for the longest time and then when his mom passed [in April], she was really able to be there for him because she understood exactly what he was going through,” they told us, recalling how Jordyn lost her father, John Woods, to cancer in 2017. “Jordyn and Karl got closer and it just naturally grew into them falling in love. They kept it to themselves at first because they didn’t want the pressure, but they’re in love and they just couldn’t hide it anymore.”

Jordyn Woods’ new video compared her lips to actress Angelina Jolie’s and thanked her parents for the ‘genetics’ after former friend Kylie Jenner admitted to getting lip fillers.

NBA Player Devin Booker has been romantically liked to two socialites since 2018 and his most recent relationship with Kendall Jenner ended last month. Take a look back at his full dating history here.

The beauty looked just like the legendary songstress in her Halloween post. She recreated one of the diva’s iconic photoshoots from the late 60s.

Jordyn Woods and Karl-Anthony Towns went all out for Halloween, transforming into Bruno Mars and Anderson. Paak!

Jordyn Woods stepped out to dinner at Catch Steak on Oct. 1, leaving little to the imagination as she wore a barely there sheer catsuit.

Jordyn Woods looked incredible as she rocked nothing but her birthday suit in a series of jaw-dropping photos.

Several of Jordyn Woods’ loved ones were there, including her boyfriend, Karl Anthony Towns. See a photo of them here!