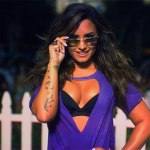 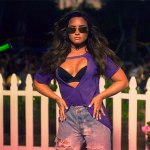 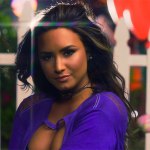 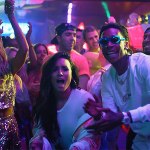 Bio:
Demi Lovato (born Demetria Devonne Lovato on August 20, 1992 in Dallas, Texas) is an American singer, songwriter, musician, and actor. They started acting early as Angela on Barney & Friends before they became better known for their starring role in the movie Camp Rock and as Sunny Munroe in the Disney Channel series Sonny with a Chance. As a singer, Demi released their debut album Don’t Forget on Sept. 23, 2008, which debuted at number two on the Billboard 200 selling over 500,000 copies and earning a gold certificate in the U.S. Their follow-up album, Here We Go Again, was released on July 21, 2009 debuting at number one on the Billboard charts selling 108,000 copies on the first week. Their album Unbroken debuted on September 20, 2011 peaking at number 4 on the Billboard 200. Demi released their 4th studio album, Demi, in May 2013, followed by Confident in 2015 and Tell Me You Love Me in 2017. Demi was forced to quit their role on Disney’s Sonny With A Chance when they went to rehab for drug abuse, an eating disorder and self-harming, which led to them being an outspoken advocate for troubled teens. In May 20, Demi revealed that they prefer they/them pronouns and further identifies as pansexual.

Best Known For:
Demi is best known for appearing alongside the Jonas Brothers in Camp Rock and Camp Rock 2, as well as their wildly successful music career.

Personal Life:
Demi’s relationship with Joe Jonas was reportedly the catalyst that sent the star to rehab, after Joe broke up with them while the two were on tour. Demi has also dated Wilmer Valderrama for six years, but they broke up in 2016. Demi’s next two relationships were much shorter-lived — MMA fighters Luke Rockhold and Guilherme Vasconcelos. They have referred to their sexuality as “fluid” in interviews.

Charitable Causes:
Demi’s involved in charity work and various social and environmental causes, especially as a spokesperson for the anti-bullying organization PACER. They are also an advocate for the LGBT community, winning a GLAAD Vanguard Award for their activism.

Meet the new Demi Lovato. Demi unleashed their new rock persona with ‘Skin Of My Teeth,’ a track about their struggle with addiction.

The ‘Cool for the Summer’ hitmaker’s new ink is in gothic font and was done by Ukrainian tattoo artist Gusak.

The ‘Tell Me You Love Me’ singer had a short a simple message when describing their ex in an Instagram comment!

Demi Lovato showed off their flawless, glowing skin when they went makeup free in a gorgeous new video.

New year, new Demi. The former pop star is taking on a new genre for their next album with a pic that gave off major edgy vibes.