Kourtney Kardashian, 42, and Travis Barker, 46, have been friends for years, as the two have resided in Calabasas, CA long before it became a residential destination for other rich and famous folks. Over the years, they’ve enjoyed lunches in the western San Fernando Valley enclave, gone to church services together and when they needed company, were the perfect hangout companions. They’re even workout buddies!

But the pair had rumored to have taken their friendship to the next level in early 2021, and became Instagram official as a couple just after Valentine’s Day. After months of a PDA-filled romance, Travis and Kourtney took another big step in their relationship and got engaged in October 2021. Almost six months after getting engaged, Travis and Kourtney tied the knot in a Las Vegas wedding ceremony — followed by a legal ceremony in Santa Barbara on May 15, 2022. Here’s a look at the timeline from Travis and Kourtney’s journey to romance, and now, husband and wife! 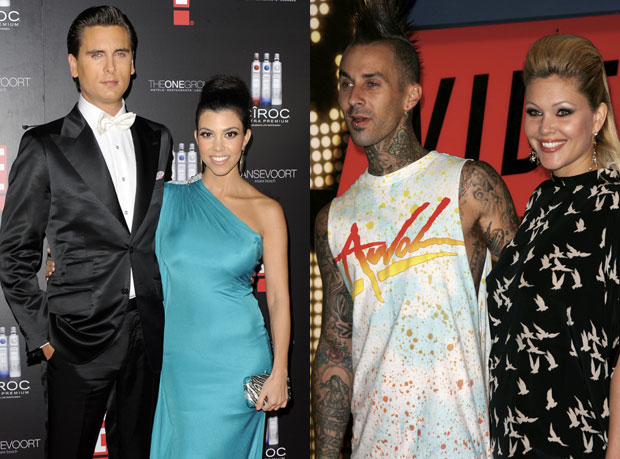 The same year that Keeping Up With The Kardashians debuted and made Calabasas synonymous with the Kar-Jenner clan for years to come, Travis moved to the L.A. suburb. The Blink 182 drummer purchased a 10,000 plus square foot mansion in The Oaks development for $9.5 million in 2007. He had decamped from Bel Air a year after his 2006 split from former beauty queen Shanna Moakler, with who he shares two children, son Landon, now 17, and daughter Alabama, now 15.

Kourtney lived in The Oaks with then-partner Scott Disick. The couple of nine years welcomed first child Mason, 11, in 2010, followed by daughter Penelope, 8, and son Reign, 6. The longtime pair split in the summer of 2015. Before their demise, the former couple bought a new mansion in The Oaks in Feb. 2014 for $7.4 million, where Kourt and the kids still live. 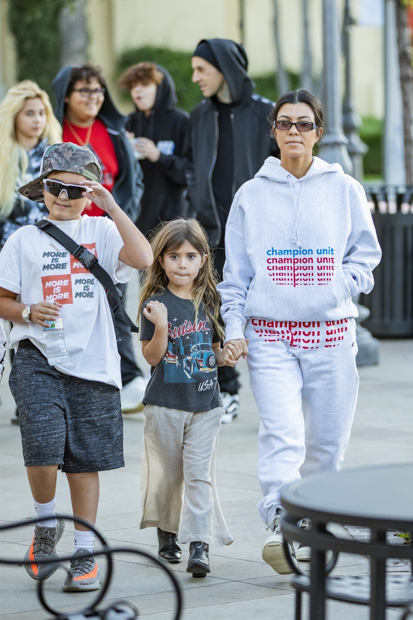 Travis Barker tags along on an ice cream run with Kourtney and her kids Mason and Penelope. Photo credit: BACKGRID.

Travis and his daughter Alabama did an interview with Entertainment Tonight in Oct. 2017 where the musician revealed, “Kourtney and Khloe live on the same street as us and Landon and Alabama are very close with Mason and Penelope.” Alabama then went on to tell a story about being a part of a Kardashian family dinner where actress and Kardashian superfan Jennifer Lawrence was a surprise guest. “The other day I told Alabama that it was a really cool dinner to be a part of,” the drummer revealed, while Alabama told a story about playing on a backyard tree swing with Penelope.

Sept. 2018: Kourtney and Travis go on a dinner date 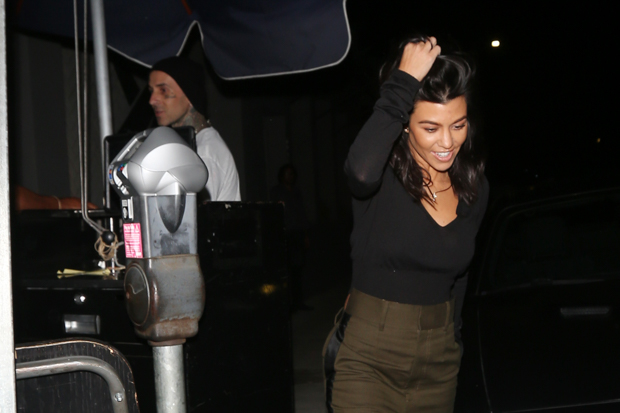 Kourtney and Travis enjoy a meal out together as friends in Sept. 2018. Photo credit: MEGA.

The health conscious pals had a dinner for two at West Hollywood’s vegan restaurant Crossroads Kitchen on Sept. 26, 2018. But it was a friendly meet up, as Travis walked Kourtney out to the valet where she picked up her car. But she did leave the eatery with a big smile on her face. Kourtney was newly single, as she and her model boyfriend of over a year Younes Bendjima had just broken up a month prior in Aug. 2018. 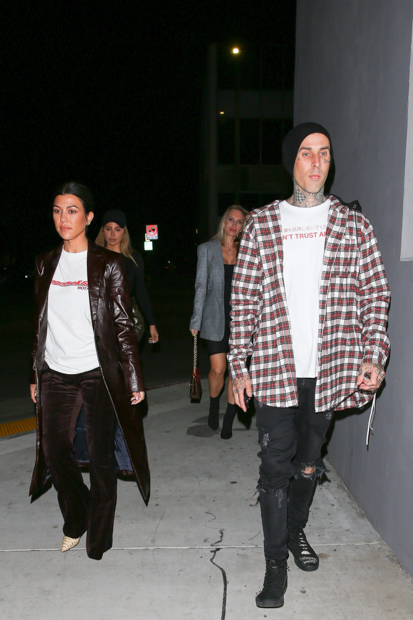 Kourtney and Travis take in a church service and dinner in Nov. 2018. Photo credit: Backgrid.

Kourtney and Travis were photographed heading to West Hollywood vegan hotspot Crossroads — again — after attending a service at Hillsong Church. But it wasn’t an intimate dinner, as Kourt had other friends along including Amanda Elise and Larsa Pippen, 46, who was BFFs with the Kardashian sisters at the time (Larsa is now on the outs with the family as of summer 2020). Kourtney and Travis left the eatery together in his Aston Martin sports car.

Feb. 2019: Kourtney and Travis head to a sushi dinner in Malibu 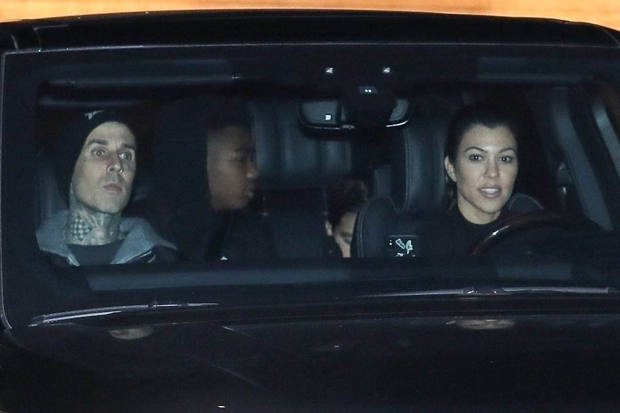 Travis and Kourtney enjoy a dinner out in Malibu in 2019. Photo credit: BACKGRID.

More than friends? Kourtney was all smiles behind the wheel as she drove away from a sushi dinner with Travis at Malibu’s upscale restaurant Nobu. They weren’t alone though, Mason tagged along for the meal and was seen in the back seat. But Kourtney and Travis’ dinners out were becoming more frequent, causing speculation that their friendship was developing into something more.

Dec. 2019: Kourtney and Travis spend quality time together, along with her kids

Kourtney and Travis’ friendship continued to grow, and he became close enough to be included on family errand running. Travis tagged along with Kourtney and her sons Mason and Reign when they made a Dec. 2019 trip to Kourt’s brother in law Kanye West’s warehouse in Los Angeles.

Kourtney posted a photos to Instagram on Nov. 19, 2020 while trying on sexy outfits in her closet. She modeled a racy black power suit featuring a blazer with nothing underneath it. Kourt held the lapels while showing off her decollitage, and Travis couldn’t hold back. He left a series of three fire emojis to let Kourtney know exactly how hot she looked, which made plenty of fans question if the two had become more than friends.

Kourtney and Travis posted the same scenery snapshots to their Instagram accounts on January 23, 2021. The photos showed a sunset with the massive pool at Kourtney’s mom Kris Jenner‘s Palm Springs estate in the foreground. Two days prior to that, Kourtney shared Instagram selfie, which showed her posing in her closet and Travis dropped a rose emoji in the comments section. By now dating speculation was at a fever pitch between Kourtney and Travis.

Kourtney finally confirmed that she and Travis had moved beyond friendship to dating. On Feb. 16, she made him Instagram official in a photo showing her perfectly red manicured hand holding onto the rocker’s heavily tattooed hand. While Kourt didn’t caption the snapshot, Travis left a black heart emoji in the comments to let fans know their love is real! Travis then re-grammed the photo to his Instagram stories to let his followers know that he’s officially with Kourtney. It took years for the pair to officially couple up, but there’s no better relationship than when a close friendship turns into a romance.

Oct. 2021: Kourtney and Travis get engaged

Kourtney and Travis got engaged on October 17. The romantic proposal took place in the middle of a gorgeous floral arrangement on the beach in Montecito, California. Travis led Kourtney out to the gorgeous setting, which included roses designed in the shape of a heart and candles, before popping the magic question. And of course, Kourtney said yes! Shortly after, Kourt shared a photo from the proposal to Instagram, writing, “forever.”

April 2022: Kourtney and Travis have a Las Vegas wedding ceremony

Kourtney and Travis had a non-legal Las Vegas wedding ceremony on April 4. Almost six months after Travis popped the question, the pair got said their vows after the 2022 Grammy Awards, according to TMZ. The pair went to an intimate wedding chapel with their own security and photographer. In true Vegas fashion, the couple had an Elvis Presley impersonator pronounce them husband and wife! Unfortunately, due to going to the chapel at 2 a.m., they were unable to obtain a legal wedding license.

May 2022: Travis and Kourtney legally wed in Santa Barbara

Making it legal! Kourtney and Travis officially wed — paperwork and all — at a Santa Barbara courthouse on Sunday, May 15, 2022. The Poosh founder wore a short white Dolce & Gabbana dress adorned with a heart, paired with burgundy velvet heels and a veil, while Travis opted for all black. The couple kept the ceremony intimate with just her grandmother MJ present and his dad Randy Barker. Shortly after getting married, Kourt and Travis shared photos of the event to social media as they posed in a vintage car.