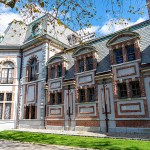 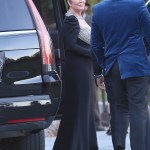 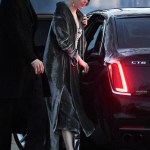 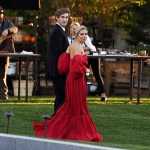 Jennifer Lawrence and Cooke Maroney touched down in Rhode Island on Oct. 18 ahead of their wedding! Their famous guests, Kris Jenner included, soon followed to enjoy a clam bake on a chilly New England night.

The wedding party is here, and it’s star-studded. Adele, Cameron Diaz, Nicole Richie and Joel Madden were all seen bundled up in coats on Rose Island (just off the Newport coast of Rhode Island) on Oct. 18, where they enjoyed a clam bake — AKA, Jennifer Lawrence and Cooke Maroney’s humble wedding rehearsal dinner! Kris Jenner made the most dramatic entrance, per usual, as she was seen strolling onto the boat dock in a luxurious black fur coat. The bride is a big Keeping Up with the Kardashians fan (she once even ended up naked in Kris’ closet after a martini-fueled dinner), so it’s no surprise to see Kris make the journey to the remote 18.5 acre island.

JLaw is reportedly marrying Cooke, an esteemed art gallery director in NYC, on Oct. 19, according to the MEGA photo agency that captured a photo of the reported wedding venue as well — Belcourt of Newport! The historic mansion is a Gilded Age treasure, full of ornamental rooms that once entertained high society guests. You can see a photo in HollywoodLife’s gallery above! Picking the venue was a no-brainer for JLaw. “I saw a dress I liked, I was like, ‘That’s the dress.’ I saw a venue, I was like, ‘Cool, we got the venue,’” the Hunger Games star said on the June 13 episode of the Naked With Catt Saddler podcast. Fitting the nuptials’ proximity to Halloween, the wedding venue also used to run ghost tours.

Jennifer and Cooke were seen arriving by plane from NYC to Rhode Island earlier that Friday afternoon. They previously sparked rumors of already tying the knot in court, after the couple was seen leaving New York City’s marriage bureau on Sept. 17, per Page Six. JLaw was pictured clutching paperwork, and her fiancé reportedly appeared to be covering his ring finger — alas, their activity was never confirmed (and there’s always the possibility of simply filing for a marriage license).

JLaw and Cooke have been linked together since May of 2018, and Cooke proposed by Feb. 2019. If that timeline seems fast, JLaw didn’t need to wait around any longer. “I just met Cooke and I wanted to marry him. We wanted to marry each other. We wanted to commit fully and you know, he’s my best friend,” she gushed on the Naked With Catt Saddler podcast. She later added, “It’s the greatest. You find your favorite person on the planet, you’re like, ‘You can’t leave.’ So, I wanted to take up on that offer.”