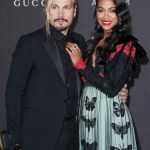 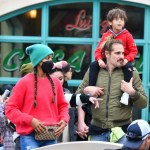 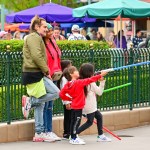 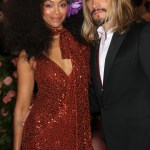 Bio:
Zoe Saldana (born Zoe Yadira Saldaña Nazario, in Passaic, New Jersey on June 19, 1978) is an American actress. She first came to fame in the early 2000’s with her roles in Center Stage and Crossroads. Later she starred in blockbuster films such as Star Trek and Avatar.

Best Known For:
Zoe Saldana is best known for her big film roles such as Avatar and Star Trek.

Personal Life:
From June 2000 Zoe Saldana was engaged to Keith Britton, an actor and CEO of My Fashion Database, until November 2011. She dated actor and former co star Bradley Cooper from 2011 to 2013. In June 2013, Zoe married former soccer player Marco Perego. Rumors swirled that Zoe was pregnant with her first child when she started flaunting a growing baby bump in July 2014.

Zoe Saldana and her husband Marco Perego looked joyful while going on thrilling rides and walking around Disney California Adventure Park with their three adorable kids on Saturday.

Zoe Saldaña discussed the ‘bittersweet’ process of transforming into Gamora for ‘Guardians Of The Galaxy’ & the skincare routine she follows to relax her skin!

Seeing green! Zoe Saldana, 40, shared the tedious process of getting into character as the green-skinned Gamora in new behind-the-scenes footage from the set of the new ‘Guardians’ movie.

Zoe Saldana looked fabulous when she channeled Baywatch in a plunging red swimsuit while on vacation.

Zoe Saldana dazzled at the Venice Film Festival as she smooched her husband, Marco Perego Saldana, in a rare outing for the couple.

Zoe Saldana wants you to ‘Vote Like A Madre’ on November 3! She urged Latinx moms to back candidates who support climate change initiatives in this EXCLUSIVE election PSA.

SURPRISE! Zoe Saldana welcomed her third child, a boy named Zen, on Feb. 18. But wait, how come we never saw a baby bump or her cute maternity clothes? Turns out the beautiful actress either used a surrogate or adopted! Here’s the scoop!