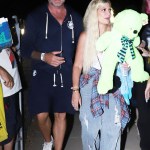 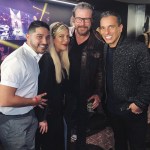 Bio:
Tori Spelling (born Victoria Davey Spelling on May 17,1973 in Los Angeles) is an American actress, author, designer, and event planner. She is the first child of legendary TV mogul, Aaron Spelling, and shot to fame when she starred in his show, Beverly Hills 90210, as Donna Martin. As an actress, she starred in a number of made-for-TV movies, and was cast in some independent films. In 2004, Tori married playwright, Charlie Shanian. The couple separated a year later, after Tori had an affair with her co-star, Dean McDermott, whom she would later go on to marry, in 2006. Tori and Dean have four kids together: Liam, Stella, Hattie and Finn. They also starred in the reality series, Tori & Dean: In Love, and Tori & Dean Home Sweet Hollywood. In 2008, Tori has written four books: sTORI Telling, Mommywood, uncharted terriTORI, and celebraTORI.

Best Known For:
Tori Spelling is best known for her role as Donna Martin on the hit TV series, Beverly Hills 90210, from 1990-2000. She is also known as the daughter of TV mogul, Aaron Spelling.

Personal Life:
Tori married playwright, Charlie Shanian, in 2004. They separated a year later, after Tori had an affair with her married Mind Over Murder co-star, Dean McDermott. Tori and Dean married in 2006, after both of their divorces were finalized.

Tori Spelling seemed to put her difficult relationship with her mother, Candy, aside when they reunited in new family photos that she posted to Instagram on Jan. 28.

Tori Spelling isn’t letting her haters keep her from rocking a bikini! After people slammed her for allegedly photoshopping a bathing suit photo, the mom-of-five hung out at the pool in a two-piece.

Screw the haters! Tori Spelling paid no mind to critics slamming her for seemingly Photoshopping a bathing suit pic by stepping out in the SAME suit. See the new pics here!

Candy Spelling is allegedly no fan of son-in-law Dean McDermott. A new report claims that she can’t stand the man that her only daughter Tori married.

Tori Spelling is reportedly thinking about expanding her family with hubby Dean McDermott despite her recent meltdown and her close friends are worried that she’s taking on more than she can handle.

Tori Spelling’s life and career have been touched by controversy and chaos, from fights with her famous parents, to her husband’s massive cheating scandal. Learn more about her biggest scandals here.