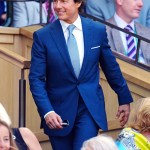 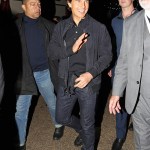 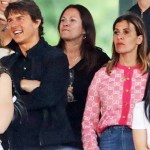 Katie Holmes is reportedly headed down the aisle towards a major custody battle with her ex-husband Tom Cruise over their 9-year-old daughter, Suri Cruise! Tom wants revenge for Katie “double crossing” him by dating his longtime friend, Jamie Foxx behind his back and now he wants to take Suri away from Katie!
Even though Tom Cruise reportedly hasn’t seen Suri Cruise in over 800 days that’s not stopping him from wanting primary custody of Suri. The actor has reportedly become so enraged over Katie Holmes and Jamie Foxx’s relationship that he’s decided to lawyer up to potentially seek custody of their little girl. Katie is reportedly terrified because she’s worried this mean Tom will finally get his wish — to make Suri a Scientologist.

Katie Holmes has never spoken out about how Scientology impacted her relationship and her life — until now that is. Dan Harris, who conducted the sit-down with Leah Remini to air on ’20/20,’ revealed that Katie will also make an appearance — and will apologize to Leah for ‘upsetting her in the past.’
“Being critical of Tom Cruise is being critical of Scientology itself. You are evil,” Leah Remini said in a new preview for her interview all about scientology and her decision to leave the church in 2013. The King of Queens star has been very vocal about her love, then hate, for the church — including her relationship with Tom’s ex, Katie Holmes.

Tom Cruise to leave the Church of Scientology for his daughter? Insiders claims Tom is over the church telling him what he can and can’t do when it comes to Suri Cruise — he allegedly plans to break free from Scientology to watch Suri grow up in peace.
This is huge news! After years of being involved (and controlled by the church), Tom Cruise, 52, is reportedly quitting Scientology for good and it’s all for daughter Suri Cruise, 9! After a heartbreaking phone call with Suri, the actor allegedly realized he’s missing out on all of her milestones and the only way to get back into the young girl’s life is to cut ties with the church.

While they say 3 times the charm, could the 4th time be the lucky number to make a Tom Cruise marriage work? Rumors are running wild that Tom has fallen for actress Lola Kirke on the set of their CIA thriller, ‘Mena’.
Is the actor ready to settle down again with another lucky lady? While it’s already been three years since Tom Cruise, 52, and Katie Holmes, 36, officially divorced, it looks like a possible romance is heating up between Tom and Lola Kirke, 24 according to a new report. We have ALL the details for you!

It’s no surprise that Tom Cruise has one of the most exciting careers in Hollywood, but how does the A-lister find a balance between his career and personal life? HollywoodLife.com has the exclusive interview with the ‘Edge of Tomorrow’ star!
On May 28, Tom Cruise, 51, traveled three countries, and two continents for a 24-hour fan premiere tour for his latest film, Edge of Tomorrow. HollywoodLife.com had the chance to catch up with him on the red carpet at his last stop in New York City and the Oscar nominee was more than willing to share with us just how he does it!

It was no secret that Nicole Kidman and Tom Cruise were the Brad and Angelina of the ’90s. When they split in 2001, it completely shocked the world — and now Nicole has revealed the reason behind the divorce.
Nicole Kidman and Tom Cruise were married for 11 years, and were one of Hollywood’s most glamorous couples. In a new interview, Nicole, 46, revealed what brought them so close, made them “deeply romantic” and ultimately what led her to Keith Urban, her “great love.”

Nearly a year after her highly publicized divorce from Tom Cruise, Katie Holmes may have found love again, this time with her new ‘Mania Days’ co-star Luke Kirby. The two have been spotted out together a lot lately, and sources say that they’re getting close on and off screen. But how does Tom feel about the alleged new romance?
Katie Holmes shocked the world when she filed for divorce from Tom Cruise in June 2012, and since then, single Katie has been focusing on her career and daughter Suri. That is, until now. It seems as though Katie and actor Luke Kirby may be more than just the friends that they have claimed to be, and the two may even be imitating their characters in the new film, Mania Days.