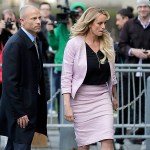 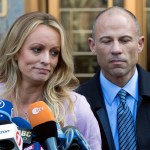 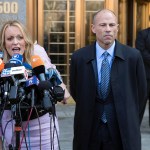 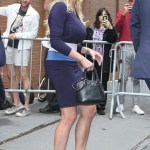 Best Known For:
Stormy is best known for her adult film career and her alleged affair with Donald Trump.

Personal Life:
Stormy is currently married to Glendon Crain. Prior to her current romance, Stormy tied the knot with pornographic actors Pat Myne (2003-2005) and Michael Mosny (2007-2009). She married Glendon in 2010 and gave birth to their daughter a year later.

Michael Avenatti, who rose to fame as Stormy Daniels’ lawyer in her case against Donald Trump and his ex attorney, was sentenced to four years in prison.

Stormy Daniels lawyer, Michael Avenatti, was found guilty of wire fraud and taking $300,00 from her in his most recent trial.

Stormy Daniels got candid about her alleged affair with Donald Trump in a new interview, revealing that it… didn’t last very long.

Stephanie Winston Wolkoff, author of ‘Melania and Me’ has released an explosive new tape revealing how the First Lady was shocked by ‘Vogue’s decision to do a photoshoot of Stormy Daniels.

President Trump’s former lawyer, Michael Cohen, just released a bombshell tell-all about his time as the president’s fixer. Here’s what you need to know about the ‘Disloyal’ author, who is currently imprisoned.

Donald Trump didn’t think the Stormy Daniels affair would hurt his image, Michael Cohen writes in his memoir; he thought it would make him seem ‘cool’ to supporters.