Update (2/4/22 8:03 pm E.T.): Stormy Daniels’ trial attorney, Clark Brewster EXCLUSIVELY told Hollywoodlife that she is “is relieved this nightmare is over.” He noted the “overwhelming proof of his deceit and embezzlement” against Michael Avenatti including his “forgery of her name and his concealed directive to wire the money to him.” The trial attorney added that she is “pleased that the justice system worked.”

Update (2/4/22 5:08 pm E.T.): Stormy Daniels celebrated her former lawyer Michael Avenatti’s guilty verdict with a stunning Instagram photo, which you can see here, where she gave her own sultry spin on Lady Justice. The adult entertainer rocked a shining gold mini dress and held up two of the most famous symbols of justice: a sword and a scale.

Update (2/4/22 4:50 pm E.T.): Stormy Daniels’ ex-lawyer Michael Avenatti was found guilty of stealing $300,000 from his client on Friday February 4. The lawyer, who had represented Stormy in her lawsuit against former President Donald Trump, was found guilty of wire fraud and aggravated identity theft, per The New York Times. Michael had forged a letter to Stormy’s literary agent getting the money sent to him. Michael’s legal troubles had begun in March 2021, when he was arrested for trying to extort money from Nike. He had been sentenced to 30 months in jail, but then was later granted a mistrial.

YES!!! @StormyDaniels KILLED IT on @CNN just now! Her point is so valid- discrediting her because of her work in the paranormal or adult industry has *nothing* to do with the simple fact Avenatti forged her signature & stole from her. Open & shut.

Before the verdict came in, Stormy had appeared on CNN to discuss the trial. She had retweeted host and writer Rachel Fine’s tweet commending her for the interview. Rachel had also showed support for the adult entertainer to get her money from her ex-lawyer in the trial. “Her point is so valid- discrediting her because of her work in the paranormal or adult industry has *nothing* to do with the simple fact Avenatti forged her signature & stole from her. Open & shut,” the tweet said.

Original: 1. Her real name is Stephanie, but you can call her Ms. Daniels — if you’re nasty. Just when you think that President Donald Trump, 71, can’t sink any lower, what with him being casually racist over “sh*t hole” countries, he still manages to shock and outrage. The latest of the never-ending scandals coming out of the Trump White House surrounds porn star Stormy Daniels, 38, and the 2016 presidential campaign. While Trump was stumping for the vote, his lawyer reportedly paid Storm (real name Stephanie Clifford) $130,000 to keep quiet about an alleged extramarital affair, according to The Wall Street Journal (per The Hill)

2. “Stormy” denied taking the money. Supposedly, Trump’s lawyer Michael Cohen set up the payment as part of a nondisclosure agreement one month before the 2016 presidential election (right after the horrible Hollywood Access tape.) Stormy allegedly told sources interviewed by the Journal that she and Donald had a consensual hookup in 2006, one year after Trump tied the knot with Melania Trump, 47. The paper had previously reported that Stormy had intended to appear on Good Morning America in 2016 to discuss the affair but pulled out at the last minute.

Michael Cohen had sent a brief statement “TO WHOM IT MAY CONCERN” and signed by “Stormy Daniels,” denying that she had a “sexual and/or romantic” affair, per the New York Post. “Rumors that I have received hush money from Donald Trump are completely false,” the statement also read. The White House declined to comment about this new 2018 report and Mr. Cohen said the allegations were “old, recycled reports, which were published and strongly denied prior to the election.”

3. She’s a former stripper from Baton Rogue. “I worked at a strip club in Baton Rouge (and I won’t mention the one I worked at when I was underage) but when I was legal I went to work at the Gold Club in Baton Rouge,” Stormy told Adult DVD Talk in 2002. “I have very mixed emotions about stripping. Because stripping got me where I am now. If I hadn’t gone in that first night I certainly wouldn’t be sitting here talking to you. Everything happens for a reason. Everything in life is a chain reaction. I am very thankful for stripping for the sex business and the adult industry in general. On the other hand I have just seen so many girls that it just ruins them.”

4. This wouldn’t be the first time she got into bed with politics. Stormy actually considered running for Senate in 2010. A group of fans attempted to recruit the politically-minded Stormy to run against Republican Senator David Vitter. While she did form an exploratory committee in 2009, per The Times Picayune, she said in 2010 that she ultimately couldn’t afford to run a senate campaign. Senator Daniels? Imagine what could have been. 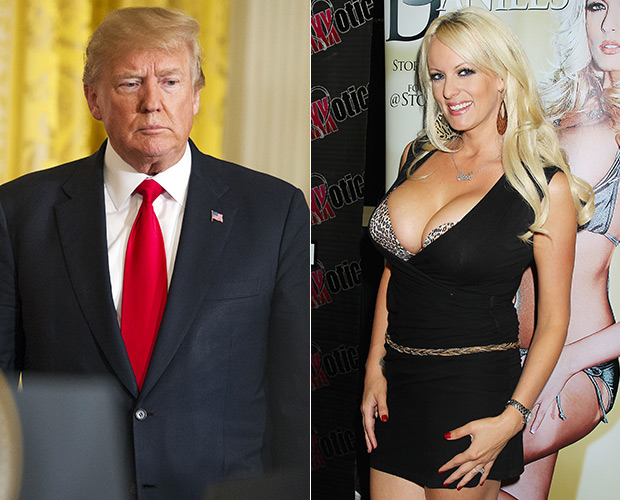 5. She took her name from her love of hair metal. Her earliest adult film listing on IMDB is for 2000’s Big Busted Goddesses of Las Vegas. Some publications list Stormy as “retired” from adult videos, though she has been directing films for Wicked Pictures since 2004. She also has a noteworthy cameo in The 40-Year-Old Virgin. As for the origin of her name? “I am such a huge Motley Crue fan,” Stormy said on the archived FAQ part of her old website.

“I wanted my cool new nickname to have some connection to the band. I did not like any of their names, but the bassist Nikki Sixx has a son named Storm. Perfect. Besides, Stormy just kind of fits.” The ‘Daniels’ came from seeing an ad for Jack Daniels, though Stormy said in 2002 that she wasn’t much of a drinker.

What do you think about this latest Trump scandal, HollywoodLifers? Do you think he paid Stormy hush-money over an alleged affair?