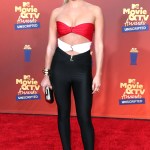 Bio:
Kristin Cavallari (born Kristin Elizabeth Cavallari on January 5, 1986 in Denver, Colorado) is an American TV reality star and fashion designer. She rose to fame in 2004 after being cast in MTV’s reality series Laguna Beach: The Real Orange County, where she was portrayed as the “mean girl” opposite the lovable Lauren Conrad. She starred on the show for two seasons, and returned to reality television on The Hills from 2009-2010, after Lauren left the series. Once The Hills ended, Kristin stepped away from the cameras to focus on family and her career as a shoe and jewelry designer. Throughout her career, she’s also made a few attempts at acting, scoring guest appearances on shows including Veronica Mars, CSI: NY and The Middle.

Best Known For:
Kristin is best known as a cast member of MTV’s Laguna Beach and The Hills.

Personal Life:
Kristin’s relationship with her high school boyfriend, Stephen Colletti, was a big storyline on Laguna Beach, and on The Hills, she dated Brody Jenner. In 2010, Kristin began dating Chicago Bears quarterback Jay Cutler, who she got engaged to in April 2011. Just three months later, they called off the engagement, but it was back on by November 2011 and they tied the knot on June 8, 2013. Together, Kristin and Jay are parents to sons Camden (born Aug. 8, 2012) and Jaxon (born May 7, 2014), and on May 11, 2015, she announced she’s pregnant with their third child.

The ‘Laguna Beach’ star opened up about wanting to gain more muscle and working out with a trainer in a new interview.

Kristin turned up the heat by posting a gorgeous snap of herself rocking a teeny black bikini. See the pic here!

Kristin Cavallari revealed what she thought about her former co-star Audrina Patridge’s ‘shocked’ reaction to MTV’s upcoming show, ‘The Hills: Next Gen,’ during a recent television appearance.

Kristin Cavallari smiled by a pool in her stylish two-piece swimsuit and a bucket hat as she sported pigtails, in her latest eye-catching Instagram pic.

Kristin Cavallari revealed in a new podcast interview that she’s ‘looking inward’ in the aftermath of her split with Jay Cutler.

Kristin Cavallari & Tyler Cameron got pretty cozy during a recent photo shoot for her Uncommon James brand, causing fans to wonder if the single mom is considering the former ‘Bachelorette’ star as a potential beau!

Kristen Cavallari looked sexy in a black string bikini as she soaked up the sun in Cabo and gave off some major spring break vibes.