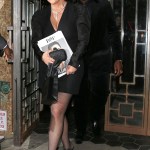 Dream celebrated her 3rd birthday with the cutest ‘Trolls’ themed bash on Nov. 8 but the love has continued on social media for her actual big day!

Kris Jenner took to Instagram on Nov. 10 to give a sweet shout-out to her boyfriend Corey Gamble in honor of his 39th birthday and she included a series of romantic photos of the two of them.

Kris Jenner arrived in style at a major red carpet event in New York City one day after the reality superstar celebrated her 64th birthday.

The ice has officially melted between Caitlyn Jenner and ex-wife Kris. She wished the mother of her two daughters a happy birthday, calling her a ‘special woman’ and telling her ‘love you.’

It’s our favorite momager’s birthday! On Kris Jenner’s special day, we’re looking back at some of her fiercest and sexiest looks throughout the years.

After a new rumor about Kris Jenner and O.J. Simpson surfaces, Kris decides to take action, and she can’t hide how upset the speculation makes her on ‘KUWTK.’

Rob Kardashian rarely posts his face — much less a full-body photo — so fans were pleasantly surprised when he revealed his full Halloween costume! He dressed up as ‘Papa Troll’ and his daughter, Dream, matched as the adorable ‘Poppy Troll.’