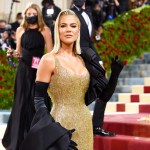 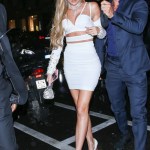 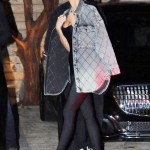 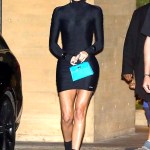 Khloe Kardashian (born June 27, 1984 in Los Angeles, California) is a reality TV personality, businesswoman, and model. She rose to fame after E!’s hit show, Keeping Up With the Kardashians premiered in 2007. The series followed the lives of Khloe and her sisters Kim Kardashian, Kourtney Kardashian, and half-sisters Kendall Jenner and Kylie Jenner, along with other members of their family including ‘momager’ Kris Jenner and her second husband Caitlyn Jenner. No topics were off limits as the cameras followed the family’s personal and professional pursuits, documenting their love lives and glamorous endeavors in Los Angeles. The show quickly became one of the network’s most watched series, and the Kardashians were catapulted to superstardom, not only in the United States, but around the world.

KUWTK quickly spawned various spin-off series, and Khloe starred in several of them, including Kourtney and Khloé Take Miami, Khloe & Lamar, and Kim and Khloé Take the Hamptons. She has also dabbled in other reality TV projects, competing on Celebrity Apprentice in 2009 and hosting the second season of the US version of The X-Factor in 2012. She hosted the short-lived series, Kocktails with Khloé, that aired for one season, and launched her show Revenge Body with Khloé Kardashian, on E! In 2017. She served as the host on the fitness and makeover reality series.

Khloe soon ventured into other projects, and she designed a clothing line for QVS and Sears and collaborated on product lines for PerfectSkin and QuickTrim. Amid their quick rise to success in the early 2010s, Khloe and her two older sisters launched a clothing boutique called DASH (which closed in 2018), and debuted a jewelry line. Among her other entrepreneurial endeavors, Khloe published their book, Kardashian Konfidential, with her sisters as a tell-all about the famous family. She has also collaborated with half sister Kylie on a makeup collection for her Kylie Cosmetics line, and worked with big sis Kim on multiple perfume collections. Most recently, Khloe launched her Good American fashion line, a size-inclusive label that produces everything from jeans to swimwear. In September 2020, it was revealed that the family’s long-running reality series will air its final season in 2021, after roughly 20 seasons.

Khloe was born to parents Kris and Robert Kardashian. Her father was a famous lawyer who defended football star O.J. Simpson during his murder trial. When Khloe was 7, Kris and Robert divorced, and her mom remarried Olympian gold medallist Bruce Jenner (who would later be known as Caitlyn Jenner). In 2001, she was in a car accident and suffered a traumatic brain injury, which caused memory loss. She still suffers from migraines and has become the spokesperson for a pharmaceutical that help with the issue. The youngest of the Kardashian trio attended various middle and high schools including Bel Air Prep, Montclair Prep and Marymount High School, before leaving to enroll in a one-to-one school and graduating early at the age of 17. Shortly after finishing school, in 2003, her father died of esophageal cancer.

In 2007, Khloe was arrested for driving under the influence, and she reported to jail in 2008. She faced a 30 day sentence and was made to enroll in an alcohol treatment program, however she was released from prison after three hours due to overcrowding. A couple of years later, she wed NBA player Lamar Odom after only one month of knowing each other. They split in 2013, four years after they first said “I do”, with Khloe filing for divorce in December. She also filed for legal restoration of her surname, having taken her husband’s last name at the time The pair didn’t finalize their divorce until 2016 after almost rekindling their romance when Lamar nearly died from an overdose in Las Vegas in October 2015. He was in a coma for four days, and Khloe withdrew her divorce petition, but later revealed it wasn’t for romantic reasons. Rather, she withdrew her impending petition in order to make medical decisions on her ex-husband’s behalf.

After she was romantically involved with rapper French Montana, and baller James Harden, Khloe confirmed she was dating NBA star, Tristan Thompson. Just months into dating, in 2017, Khloe became pregnant with her first child. She gave birth to daughter True Thompson on April 12, 2018, shortly after videos surfaced of Tristan cheating on her with multiple other women. Despite getting cozy with other women while she was heavily pregnant, Khloe forgave Tristan and welcomed him back into her life. Nevertheless, the Good American mogul finally broke things off with Tristan in February 2019. It came after he reportedly cheated on her again by kissing Kylie Jenner’s BFF, Jordyn Woods, at a party. Since then, Tristan has been trying desperately to get back in Khloe’s good books, filling her IG comments section with all sorts of flirty remarks. Reports have since emerged that the co-parents have rekindled their romance.

The Most Popular Questions About Khloe Kardashian

How Tall is Khloe Kardashian?

Khloe Kardashian is actually the tallest of her sisters, coming in at 5’10. However, her younger half-sister Kendall, who is a model, comes in at the same height.

How Did Khloe Kardashian Lose Weight?

Khloe has spent years working on herself: from strict diets in her younger years, to losing over 40lbs after giving birth to baby True. Her secrets include ‘rarely’ eating carbs and never eating them at all at night time. She’s also upped her exercise regimen over the years, which she was very open about on her show, Revenge Body.

Who are Khloe Kardashian’s Best Friends?

Aside from her sisters, Khloe’s closest friend is ride-or-die Malika Haqq. Khloe and Malika have been inseparable for years, and Malika was one of the first friends to have her back after the Tristan/Jordyn drama. As a new mom, Malika is often calling Khloe for advice on how to best take care of her son, Ace.

Khloe Kardashian looked stunning when she debuted new front bangs on the cover of ‘Sorbet’ magazine.

Lamar Odom revealed there’s a lot the public doesn’t know about his infidelity during his four-year marriage to Khloe Kardashian, in a new interview for an upcoming special.

Tristan called True his ‘princess’ while they practiced their choreography together after she asked if her NBA star dad knew ‘how to dance.’

There’s never a shortage of good fashion at the KarJenner Christmas Eve celebration, and Khloe Kardashian brought her A-game to the 2022 event.

Khloe treated her daughter and niece to some holiday fun just days before Christmas, and it looked like the girls had a total blast.

Lamar Odom’s documentary will ‘rip open old wounds’ about his split from Khloe Kardashian. Find out what she thinks.

While letting fans know the exciting news, True hilariously announced that she also ‘lost’ her toe.