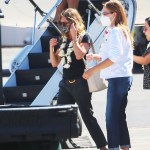 Bio:
Jennifer Aniston (born February 11, 1969 in Sherman Oaks, Calif.) is an American actress, film director, and producer. Jennifer is known for her famous role as Rachel Green on the 1990s sitcom Friends, which earned her an Emmy Award, a Golden Globe Award, and a Screen Actors Guild Award. Jennifer also gained success in film with critically acclaimed performances in movies like She’s the One (1996), Office Space (1999), The Good Girl (2002), and Friends with Money (2006). She has also been praised for her latest work in films like Bruce Almighty (2003), The Break-Up (2006), Marley & Me (2008), Just Go With It (2011) and Horrible Bosses (2011). In 2012 Jennifer received a star on the Hollywood Walk of Fame. She is one of the highest paid actresses in Hollywood today and as of 2014 her net worth is estimated to be $150 million. She has also been included in magazines’ lists of the world’s most beautiful women. Her most recent movies include We’re the Miller’s (2013) and Cake (2014). For her role in Cake Jennifer was nominated for a Broadcast Film Critics Association Award, a Golden Globe Award for Best Actress in a Motion Picture – Drama, and a Screen Actors Guild Award.

Best Known For:
Jennifer made her hairstyles famous and was one half of the “will they or won’t they” couple of the ‘90s in Friends, but off-screen, it’s been hard for her to shake being one-third of the Brad Pitt–Angelina Jolie love triangle.

Personal Life:
She famously married Brad Pitt in a one million dollar ceremony, but their relationship soured when he met Angelina Jolie on the set of Mr. And Mrs. Smith, shortly after which Jen and Brad decided to divorce. She has also been linked to Vince Vaughn, John Mayer, and Gerard Butler. Jennifer is now married to actor/writer Justin Theroux. Her and Justin started dating in May of 2011 and get married in August 2015.

They’ll ALWAYS be there for you! New ‘Friends’ merchandise is on sale for a limited time, so Courteney Cox and Jennifer Aniston teamed up to model adorable ‘Friends Forever’ clothes.

Jennifer shared an adorable video montage of her time in Paris filming the rom-com with her ‘buddy’ Adam.

The actress posted a series of throwback photos of her ‘The Morning Show’ co-star to wish her a very happy birthday.

Jennifer Aniston also revealed how she starts her morning, including a lemon water and oatmeal routine to keep her skin glowing.

Jennifer rang in her birthday by showing off her unique ensemble as she thanked all her friends for making her big day special!

Jennifer rocks an ‘I’m A Cool Blonde’ sweater as she lights up what appears to be a cigarette in the since-deleted clip from Justin.

The ‘Friends’ star and her mother had a notably tumultuous relationship throughout her life. Find out everything you need to know about Nancy Dow here.