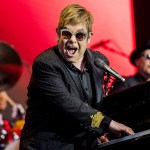 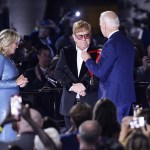 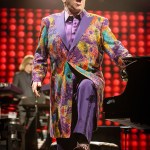 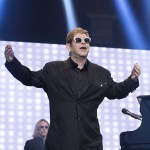 Bio:
Elton John (born Reginald Kenneth Dwight in Middlesex, England on 25 March 1947), in Boise, Idaho in 1984) is an English rock singer songwriter and composer. He has sold more than 250 million records, and he has more than 50 Top 40 hits. Elton has won six Grammy Awards, four Brit Awards, an Academy Award, a Golden Globe Award, and a Tony Award. In 1992, Elton established the Elton John AIDS Foundation and a year later began hosting his annual Oscar viewing party.

Best Known For:
Elton John is best known for releasing over 30 albums, winning many Grammys and singing famous songs like “Candle In The Wind” and “Tiny Dancer.”

Personal Life:
Elton John was engaged once and married once to a woman, but he later admitted he was gay in 1988. Elton entered into a civil partnership with long term partner David Furnish in December 2005. They have two kids — Zachery (born 2011) and Elijah (born 2013). In March 2014, same-sex marriage became legal in England and Wales. Elton and David retroactively converted their civil partnership into a marriage and had a ceremony in December 2014.

HL caught up with Elton John’s producer-husband at the NYC premiere of ‘Rocketman,’ where he revealed how hard it was for the singer to relive his childhood via the biopic.

No one throws a party quite like Sir Elton John! His annual Elton John AIDS Foundation’s 27th annual Academy Awards viewing party had no shortage of stars this year! See photos of all the celebs who showed up to the bash including Heidi Klum, Adriana Lima and more!

Miley Cyrus’ Elton John tribute performance of ‘The B*tch Is Back’ was incredible, and we’re obsessed! Seriously, how good was that?!

Elton John was caught storming off a stage and swearing at a concertgoer, but he had a reason for it! In a statement given to HollywoodLife, the singer explains what happened in Vegas.

Yes, it is true! We’re not the only ones gushing over Zayn Malik’s ‘Pillowtalk’ because Sir Elton John just admitted he’s a fan of his big hit too! HollywoodLife.com has all the details here.
When Elton John, 68, praises your work, you know you’re doing something right! Zayn Malik, 23, has a lot to be excited for and what Elton said about his latest song “Pillowtalk,” should make him proud of himself too. Read all the details of what the legendary singer said about him below.

Due to a three-year rift between Elton and his mother, baby Zachary has yet to, and might never, be introduced to his 86-year-old grandma.
What a shame. Sir Elton John, 64, and David Furnish, 48, welcomed their baby boy Zachary, via a surrogate mother, on Christmas Day of last year, but Elton’s mom Sheila Farebrother had no idea they were even expecting!

Elton reveals that his surrogate-born baby Zachary is on a strict breastmilk diet. That means the musician has either hired a wet nurse or he’s buying milk from a breast milk bank!
Sir Elton John made the surprising confession about 2-month-old Zachary during a recent interview with the baby blog Not So Average Mama, where he says baby Zachary “is thriving off an awesome diet of breastmilk.” But where is the milk coming from? It’s certainly not Elton’s!