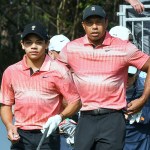 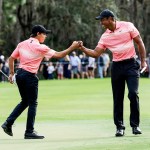 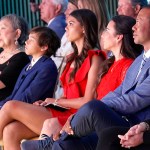 Elin Nordegren (born Elin Maria Pernilla Nordegren on January 1, 1980, in Stockholm, Sweden) is a Swedish model and former nanny. Elin — the daughter of a Swedish politician and an international radio journalist – is best known not for her brief modeling career, but for being Tiger Woods‘ ex-wife, the one he cheated on with over a dozen women.

Elin was born into a high-achieving Swiss family. Her mother is Barbro Holmberg, a politician, and former Swedish migration and asylum policy minister (as well as the former Governor of Gävleborg County.) Her father, Thomas Nordegren, worked as a radio journalist and as bureau chief in Washington, D.C. So, when Mia Parnevik, wife of Swedish golfer Jesper Parnevik, hired Elin as a nanny for their children, she didn’t balk, especially when the job required her to move to the United States, full-time. It was there that Elin would meet her future ex-husband, Tiger Woods.

Elin briefly worked as a model, mainly to help finance her studies at Lund University. Money would soon not be a problem for Elin, and she would eventually graduate from Rollins College in Winter Park, Florida, with a degree in psychology.

Elin is best known as the ex-wife of Tiger Woods, specifically the wife involved in his 2009 infidelity scandal. Nine years before that, Tiger became infatuated with Elin and asked to be introduced to her in 2000. At the time, she was seeing someone else. However, Tiger persisted, and the two began dating in the early 2000s. It was a short courtship. In 2003, while in South Africa for the Presidents Cup tournament, Tiger took Elin on a trip to the Shamwari Game Reserve. It was there that he popped the question, and she said yes.

The couple was married on October 5, 2004, at the Shady Lane resort in Barbados. Tiger reportedly rented out the entire complex for the week, including three golf courses and 100 rooms. Celebrity guests at the wedding included Michael Jordan, Charles Barkley, Oprah Winfrey, and Bill Gates. From there, it seemed Tiger and Elin were set to have a “Happily Ever After.” The couple welcomed their first child together – a daughter named Sam Alexis – in 2007. Two years later, they welcomed another child, a son they named Charlie Axel, in 2009.

Unfortunately, at the end of that year, everything fell apart. In November 2007, Tiger drove a Cadillac Escalade SUV when he collided with a fire hydrant, a tree, and several bushes near his home. Elin allegedly used a golf club to smash the car window and help Tiger out of the car, but a 2013 report by The New York Post alleges she chased him with a club after discovering that he was cheating on her by going through his cell phone.

Tiger issued a statement in December 2009, admitting his affairs and apologized “to all those who have supported [him] over the years.” In the wake of this admission, a dozen women claimed in various media outlets that they had affairs with the then-married Tiger. Following these claims, Tiger issued another statement, announcing his “indefinite break” from professional golf. Tiger’s scandal saw several sponsors (Gatorade, Accenture, General Motors) end their sponsorship deals with Tiger, while other companies (Nike, Electronic Arts) stuck by him. In February 2010, Tiger gave a televised interview and said he had undergone a 45-day therapy program for sex addiction. In the following March, he announced his return to golf.

While Tiger’s career was salvaged, his marriage was not. Elin and Tiger divorced in August 2010. She reportedly received $100 million in the split. Elin purchased a $12 million mansion in Florida. Since the split, she has gone on to have a relationship with coal magnate and philanthropist Chris Cline and former NFL player Jordan Cameron. In June 2019, Elin announced that she and Jordan were expecting a child, and she gave birth to a son that following October. Despite the acrimonious end to their relationship, Tiger and Elin have been able to co-parent their two kids and have been seen together at numerous public events, like golf tournaments.

Once, Elin Nordegren was known as Tiger Woods’ wife and the mother of his children – but his infidelity saw to the end of that. Get to know about Elin and Tiger’s current relationship, as it stands today.

Following Tiger Woods’ terrifying car wreck, ex-wife Elin Nordegren has reportedly ‘bent over backwards’ to make sure he still gets time with their kids.

The first photos of Tiger Woods’ kids taken after their dad’s terrifying car crash have surfaced. The children, Sam and Charlie, were pictured with their mom Elin Nordegren as they left a soccer practice.

Tiger Woods’ fame almost cost him his relationship with his future wife, according to HBO’s new ‘Tiger’ docuseries about the golf legend’s life.

New Year’s Day is already exciting — but it’s even more special when the holiday doubles as your birthday! See which celebs were born on January 1, as we celebrate their big day and the start of a new year!

Fans have watched as Tiger Woods and Elin Nordegren’s two children grown up before their eyes. On Tiger’s 45th birthday, we’re looking back at how much the youngsters have grown up!