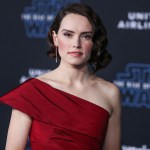 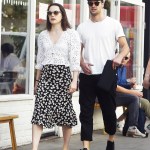 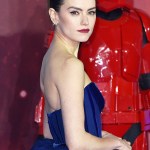 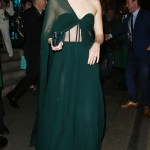 Bio:
Daisy Ridley (born April 10, 1992 in Westminster, London, England) is a British actress. While growing up in West London’s Maida Vale district, Daisy attended the Tring Park School for the Performing Arts in Hertforshire, graduating in 2010. Daisy made her acting debut three years later with guest-star roles on the BBC television series, Casualty, Youngers and Toast Of London. That year, she also appeared in a handful of short films including Lifesaver, which was nominated for a BAFTA award and Blue Season, which was entered in the Sci-Fi-London 48-hour film challenge. In 2014, J.J. Abrams announced that Daisy was cast in the role of Rey, one of the lead characters in Star Wars: The Force Awakens.

Best Known For:
Daisy is best known for her television appearances and being cast in Star Wars: The Force Awakens

Personal Life:
Daisy is the youngest of five children. She has two sisters and two half-sisters from her father’s previous marriage. Daisy’s sister, Kika-Rose, works as a model. Daisy is reportedly dating actor Charlie Hamblett. Daisy is highly skilled at cabaret singing, jazz dancing, mezzo-soprano and tap. She’s also interested in sports, reportedly skilled at swimming, pilates and tennis. Daisy made an appearance in the music video “Lights On” by the English hip-hop star, Wiley.

Daisy Ridley wowed at Paris Fashion Week with a new haircut and a fashionable blue patterned coat as she posed for confident and gorgeous photos.

Many ‘Star Wars’ fans were not thrilled with John Boyega after he made a seemingly sexist comment about his ‘Rise of Skywalker’ costar Daisy Ridley.

The world premiere of ‘Star Wars: The Rise of Skywalker’ finally happened on Dec. 16. For such a momentous occasion, Daisy joined stars like Mark Hamill, Harrison Ford, John Boyega and more in a dazzling red gown!

Daisy Ridley has been busy promoting her new movie ‘Star Wars: The Rise of Skywalker’ & her press tour outfits have been nothing short of perfect!

Talk about going out with a bang! A new ‘Star Wars: The Rise of Skywalker’ BTS trailer dropped, and let’s just say this: you’re definitely going to feel the force in Episode 9! Watch it here!

‘Molly’s Game’, ‘Star Wars’, ‘I, Tonya’ and ‘The Greatest Showman’ are just some of the most-talked about movies of the month and the stars have been SLAYING the carpet!