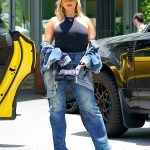 Bio:
Bebe Rexha (born Bleta Rexha on August 30, 1989 in Brooklyn, New York) is an American singer, songwriter and producer who was worked with some very notable artists, including G-Eazy, Eminem, Rihanna and David Guetta. Bebe’s career in music launched after she met Fall Out Boy’s Pete Wentz in 2010, and he placed her as the lead vocalist in his experimental music project, Black Cards. In March 2016 Bebe launched a solo artist career, releasing her hit single “No Broken Hearts” which featured Nicki Minaj. Her solo album All Your Fault is due out in early 2017.

Best Known For:
Bebe is best known for her her chart-topping single, “No Broken Hearts”.

Cut it out! The pop star put her bombshell curves front and center in her barely-there black one-piece.

Bebe Rexha looked so gorgeous striking sexy poses as she flaunted her figure in photos taken during her sunny getaway to Hawaii.

Bebe Rexha celebrated her curves in a TikTok video while sharing an inspirational message about self-acceptance.

While embracing her natural beauty in an unfiltered video, Bebe Rexha shared an inspiring message about body positivity.

Bebe Rexha AND Doja Cat. Could we ask for anything more from the American Music Awards?

Bebe Rexha ’embraces the fact that she’s not a stick’ and ‘loves her curves’ despite the recent paparazzi pics that bothered her and prompted her to show off her swimsuit body with her own camera.

Bebe Rexha clapped back at ‘nasty’ paparazzi photos with a gorgeous video of herself rocking a Fendi swimsuit, all while embracing her ‘stretch marks’ and ‘cellulite.’