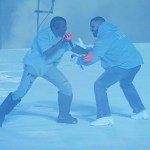 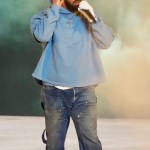 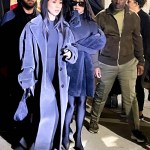 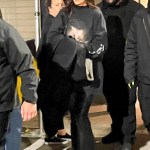 There CAN be peace in our time. After clashing for years, Kanye West and Drake teamed up for the #FreeLarryHoover concert and performed each other’s hits.

Did anyone think that 2021 would end like this? After Kanye “ye” West and Drake resurrected their rivalry earlier in the year, the two decided to bury the hatchet and team up for a worthy cause. Ye, 44, brought out Drake, 35, during the  Free Larry Hoover Benefit Concert on Thursday (Dec. 9), West’s first headlining show in five years.

After seeing Ye and Drake patch things up, it was worth the wait. At the LA Memorial Coliseum, the former feuders each had their own sets as they performed their tracks — as well as each other’s. Kanye performed Drake’s “Find Your Love,” while Drake later performed “24” from the recently-released Donda. The two were even spotted dancing to each other’s respective performances.

For those who need catching up, Larry Hoover has been incarcerated since 1973, serving a life sentence for the murder of a drug dealer named William Young. Larry, a founding member of the Gangster Disciples, was given six life sentences — 200 years — in prison. In 1997, Larry was convicted on drug conspiracy, extortion, and other charges, accused of still leading the Gangster Disciples while in prison. While behind bars, Larry has denounced violence and decreed that all the gang’s members go to school, develop skills and trades, and become valued members of society. Larry’s family and associates have tried to free him, saying he’s served enough time for his crime.

This issue is so severe that it brought Drake and Ye together. “I’m making this video to address the ongoing back and forth between myself and Drake,” Kanye said in a video that music executive J Prince posted to social media on Nov. 8. “Both me and Drake have taken shots at each other, and it’s time to put it to rest. I’m asking Drake on December 7 to join me on stage as a special guest to share the two biggest albums of the year live in Los Angeles with the ultimate purpose being to free Larry Hoover.” A week later, Drake appeared alongside Ye in a now-deleted photo. Drake shared videos of the meeting to his Instagram, including one clip where he put his arm around Kanye in a display of brotherly love.

Ye and Drake started as friends before turning into friendly rivals and, ultimately, actual rivals. “Before I ever got the chance to meet him, Kanye West shaped a lot of what I do, as far as music goes,” Drake said in a 2009 MTV News Interview. “We always, always, always took the time to listen to Kanye’s music and appreciate it beyond.” That year, Drake met Kanye and worked together on “Best I Ever Had.”

Ye produced two songs for Drake’s debut album, Thank Me Later, and Drake appeared on “All of the Lights,” off of My Beautiful Dark Twisted Fantasy. The cracks first showed in 2011. Drake and Lil Wayne were working on a joint project when Ye and Jay-Z announced Watch The Throne, their collab album. “I heard some other guys are coming out with an album, too,” Drake told MTV.

However, things seemed good when Kanye joined Drake for the 2013 OVO Fest. Kanye also seemingly shrugged off what Drake said in a 2014 interview with Rolling Stone. “There were some real questionable bars on [Yeezus],” he said. “Like that ‘Swaghili’ line? Come on, man. Even Fabolous wouldn’t say some sh-t like that.” Ye appeared at OVO Fest in 2015 and 2016, but those cracks soon widened. During a stop on his Saint Pablo tour, Ye went off on a rant and alleged Drake and DJ Khaled “set up” their song “For Free” with radio stations, per The Fader.

The feud blew up in 2018 when Drake’s longtime rival (and Ye’s friend) Pusha T blasted Drake for using a ghostwriter on “Infrared.” After a social media back-and-forth, Pusha dropped “The Story of Adidon,” exposing Drake’s son Adonis. Ye denied that he told Pusha about Drake’s kid and apologized to Drake later in the year for “stepping on” Drake’s Scorpion by releasing Ye before it.

However, shortly after that apology, Ye went on Instagram to blast Drake for insinuating that he had sex with Kim Kardashian in the past. “People making rumors or thinking you f— my wife and you’re not saying nothing… that don’t sit well with my spirit,” West said. “You know, if I had a girlfriend from Chicago, her name was Renita, and you was married to Rihanna, I wouldn’t make no song called ‘Riri.'” Drake and Ye spent the rest of 2018 beefing, with Kanye going off on Drake in Twitter rant after Twitter rant.

Things seemed to quiet down for a few years until Consequence, the veteran rapper and Kanye ally, tweeted, “We looking for [the] Drake drop date,” suggesting that Ye wanted to drop DONDA the same day Drake was going to release Certified Lover Boy. There was further back and forth between them, and Drake seemingly took a shot at Ye in Trippie Redd’s “Betrayal.”

Ye posted his response on Instagram, sharing a screenshot of a group chat that supposedly included Drake. “I live for this. I’ve been f-cked with by nerd ass jock n—– like you my whole life. You will never recover. I promise you,” he said while including a picture of Joaquin Phoenix’s Joker. Drake seemingly referenced the feud in “7am on Bridle Path” from CLB.

After years of fighting, it seems that these two have called a truce – at least for Larry Hoover’s sake. Kanye has seemingly taken up criminal justice reform as a cause, a passion he now shares with his estranged wife, Kim Kardashian. Kim has taken up the cause of freeing many incarcerated persons, and it seems this influence has rubbed off on Ye. Though Kim and Ye split in February 2021, Ye would “do anything” to get his wife back. The former couple did reunite at Virgil Abloh’s memorial in early December, shortly after they reunited at a tribute show in Miami, and she did thank him during her acceptance speech at the 2021 People’s Choice Awards.