Well at least Kanye West isn’t Twitter ranting about personal issues between his wife Kim Kardashian, 39, and his mother-in-law Kris Jenner. This time he’s taking shots at the music industry, saying artists are “slaves” to their record companies and name checking other musicians including Drake, JAY-Z and Travis Scott. The 43-year-old’s opening salvo on Sept. 14 came with the tweet, “I’m not putting no more music out till I’m done with my contract with Sony and Universal…On God…in Jesus name…come and get me,” and included an emoji of a downhill skier. 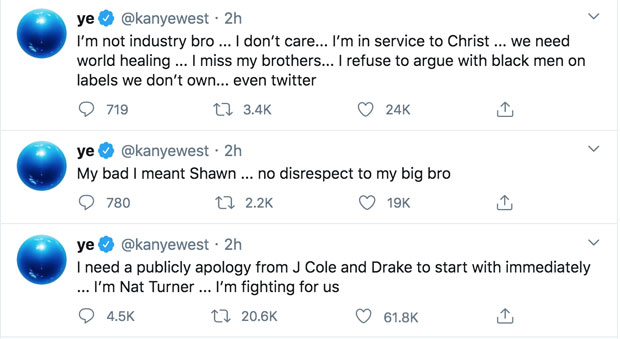 He then made the demand, “I need a publicly apology from J Cole and Drake to start with immediately…I’m Nat Turner…I’m fighting for us,” referring to the Black slave who in 1831 led a slave rebellion in Southampton County, Virginia. It is unclear what his beef is with Drizzy and J Cole and why they need to publicly apologize to him. The last sign of Yeezy’s feud with Drake came in Jan. 2020 when Drizzy appeared on Future‘s new track “Life Is Good” and rhymed, “N***as gotta move off my release day, huh, b***h this is fame, not clout, I don’t even know what that’s about, watch your mouth.” In June 2018, Kanye released an album less than three weeks before Drake’s much anticipated double LP, Scorpion dropped.

Kanye then tweeted and later deleted, “I’m waiting to meet with Sean Carter also.” Instead he replaced it with “My bad I meant Shawn…no disrespect to my big bro,” referring to 50-year-old JAY-Z’s real name. The two men have beefed since Kanye went on a series of concert rants against HOVA in 2016. Yeezy then tweeted “I’m not industry bro…I don’t care…I’m in service to Christ…we need world healing…miss my brothers…I refuse to argue with black men on labels we don’t own…even twitter.”

Kanye — who has bipolar disorder — recently told  Nick Cannon, 39, on the Cannon’s Class podcast, that he’s ready to show people, including Jay, that he has “worth.” “So I’m thinking people call me crazy so I’m going to show them, I’m gonna even show my big bro I’m not crazy,” Kanye said. “I’m going to show Jay-Z, I’ma, you know, I’m gonna show him that, you know, that my value, that you could be diagnosed and people could point fingers at you, and you could still be a citizen and you could still have value.”

He continued with the theme of no shade, writing, “I have the utmost respect for all brothers…we need to link and respect each other… no more dissing each other on labels we don’t own.” Kanye then made a reference to Travis Scott‘s multi-level sponsorship deal with McDonalds. He just unveiled his own customized meal consisting of a quarter pounder with bacon and lettuce, medium fries and a Sprite, as well as his own action figure!

Related: Jay-Z’s Mom: Everything To Know About Gloria Carter

In the process he also named dropped Black entrepreneur, author and Translation marketing founder Steve Stoute. tweeting, “I’m sure Steve Stoute was hurt that he didn’t do the McDonald’s deal…Steve’s a good man Trav is a good man …my brothers let’s rise up … we don’t even own these companies.”

I need to see everybody’s contracts at Universal and Sony

I’m not gonna watch my people be enslaved

I’m putting my life on the line for my people

The music industry and the NBA are modern day slave ships

Born-again Christian Kanye then went on to say that his ego tends to get the best of him, only to turn around and say he’s a modern day Moses. “Let’s stop killing each other…let’s show God that we are Gods people…my ego gets the best of me too…God doesn’t measure us by money in his kingdom…let’s love each other… I love my brothers and I miss my friends.”

He then went on to add, “I need to see everybody’s contracts at Universal and Sony I’m not gonna watch my people be enslaved I’m putting my life on the line for my people The music industry and the NBA are modern day slave ships I’m the new Moses.”

Kanye last went on a major Twitter rant in mid July, where he claimed Kim and Kris were trying to have him hospitalized against his will after he had a tear-filled breakdown at a campaign rally where he asserted that he and Kim discussed aborting their daughter North West, now 7. He even claimed he’d been trying to divorce Kim since 2018, and referred to Kris as “Kris Jong Un,” in comparison to North Korea’s dictator.

Kim later wrote a lengthy social media statement on July 22, saying that “As many of you know, Kanye has bi-polar disorder, Anyone who has this or has a loved one in their life who does, knows how incredibly complicated and painful it is to understand.” She later added that “Those who are close with Kanye know his heart and understand his words some times do not align with his intentions” during his episodes. Kanye later apologized to Kim for his outbursts, and she flew to see him at his Wyoming ranch. However, she was photographed openly weeping during an apparent argument and flew back to L.A. alone the next day.