Jennifer Garner fueled engagement rumors on Tuesday when fans pointed out a large diamond ring on her left hand in a recent Instagram video.

Is Jennifer Garner engaged? That’s what fans were wondering on Tuesday when the 49-year-old flashed a ring on her left hand in an Instagram video. While the mother-of-three chatted with her former 13 Going on 30 co-star Judy Greer, Jennifer sported a substantial diamond ring on her left ring finger, sparking speculation about a possible engagement to John Miller, 40, whom she’s been dating since 2018 (with a few breaks in between).

As Jen and Judy discussed their ever-evolving relationship with drinking in the 25-minute video, the actress, who shares three children with ex-husband Ben Affleck, 49, didn’t say anything about the ring. Jennifer and CaliBurger CEO John were reportedly “back on” per an Us Weekly report that came out in May after breaking things off in Aug. 2020. As Jen’s ex Ben began heating things up with his former flame, Jennifer Lopez, 52, apparently so did Jen and John who now may be taking their relationship one step further.

Jennifer was first linked to the businessman in Oct. 2018 — aka the same month the Alias alum finalized her divorce from Ben. At that point, Jen and John had reportedly been “together for six months’ and were “getting pretty serious,” sources told Us Weekly. The couple made their first public appearance together at a movie date in Nov. 2018.  As the romance continued into 2019, a source EXCLUSIVELY told HollywoodLife in January of that year that Jen was “extremely happy” to be dating John, and loved that “he’s normal and not in the industry,”

Jennifer Garner -- Pics Of The Actress 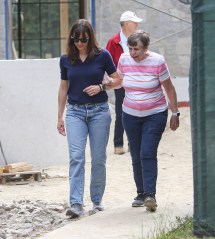 The engagement rumors come on the heels of Jen also reuniting with her ex-husband and J.Lo for a family Halloween gathering to do some trick-or-treating in Malibu, California. According to a source close to Jen, the co-parenting relationship they all share seems to be working out well. “She really likes [J.Lo] because she sees how she makes Ben feel,” a source shared, adding that Jennifer “respects” J.Lo as a parent. (The singer shares twins Emme and Max, both 13, with ex-husband Marc Anthony.) “During this Halloween, the kids went out together and wanted to have fun. They all met [and] exchanged pleasantries.”