Behati Prinsloo and Adam Levine seem to be enjoying some time in the sun before the likely wedding of close friends Gwen Stefani, 51, and Blake Shelton, 44! The 33-year-old proved she’s super model status in a sexy strapless bikini as she went for a dip at Miami Beach on Friday, July 2. Her top featured a bow style tie closure, which she paired with the stringy, barely there bottom. Behati, who hails from Namibia, kept her eyes protected with a pair of plastic black sunglasses that read “CEO” on the side. 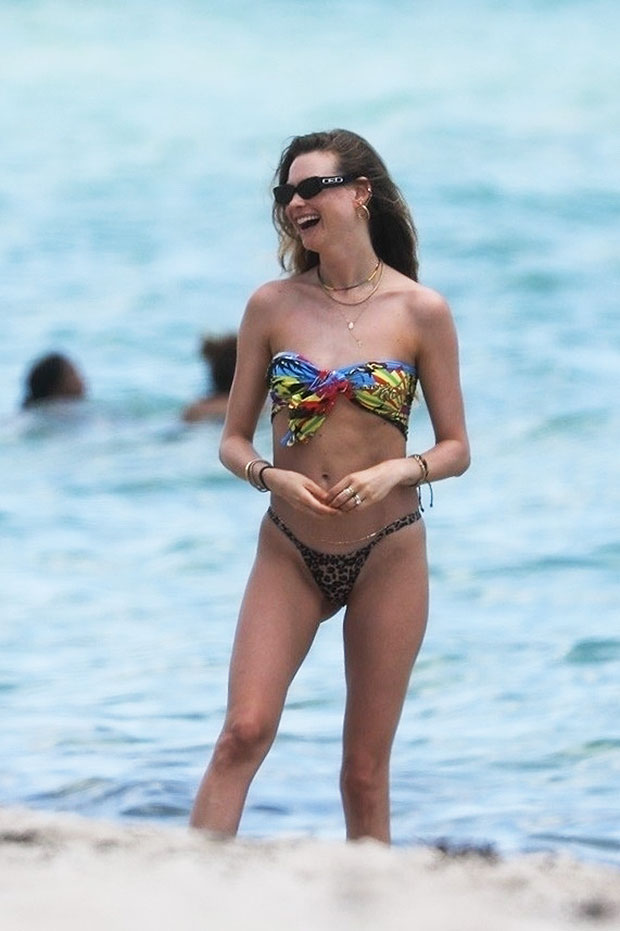 The limited edition sunglasses were from a collaboration with Gentle Monster and designer Alexander Wang in 2018.She was later spotted lounging in a pool chair at a beachfront hotel, throwing on a white-and-black baseball cap. Meanwhile, her husband Adam Levine, 42, was also spotted around the southern Florida city as he headed to the gym for a personal training session. The Maroon 5 singer looked buff in a unicorn tank top showing off his tattoos.

Adam and Behati are, of course, close friends of both Gwen and Blake via Adam’s time on The Voice. All three singers have appeared on the NBC reality show as judges, which is also where the former No Doubt singer and country star struck up their romance! Gwen and Blake, who became engaged in 2020 after five years of dating, are believed to be getting married this weekend: the “Nobody But You” singers took out a marriage license in Blake’s home state of Oklahoma on Tuesday, June 29 (the documents were obtained by HollywoodLife). Per state law, couples have 10 days to tie the knot after filing for the license — meaning the latest Gwen and Blake can legally marry is Friday, July 9.

The nuptials are reportedly set to take place outdoors at Blake’s sprawling 1,200 acre ranch in Tishomingo, Oklahoma. The spot is a special place for Gwen and Blake, as it’s also the spot he proposed to the California native with a stunning round solitaire cut diamond ring, ranging between six and nine carats. Notably, the ranch is closest to the Dallas Fort Worth airport which is just a two hour flight from Miami, where Adam and Behati were spotted July 2.

In months leading up to the wedding, there’s been plenty of chatter about Adam possibly performing at the wedding! While it’s impossible to two tell of consummate jokesters Adam and Blake were being serious about the potential plans, we’re sure Adam would have no problem bringing some musical entertainment to Gwen and Blake’s big day!

“I’ve decided that I’ve been doing this a long time now and I’ve got a lot of favors out there. He may not like it, but Adam Levine’s gonna have to get the band together and come and play our wedding,” Blake said to late night host Seth Meyers back in Dec. 2020. Never one to miss a barb, Blake went on to explain that he would want Maroon 5 to sing because they’re “boring”, they wouldn’t “distract from the festivities.” In April 2021, Gwen revealed she’d “love” for Adam to sing.

“I definitely would love to have Adam sing at our wedding, but you know, the thing is, is that I feel like we’re not gonna have a wedding band. I feel like we’re not,” Gwen admitted, explaining she planned for her wedding to be “simple.” This is the second wedding for both Gwen and Blake: she was previously married to Gwen was married to Gavin Rossdale, 55, from 2002 – 2016, who she shares kids Kingston, 14, Zuma, 12, and Apollo, 7, with. Meanwhile, Blake was married to Miranda Lambert, 37, from 2011 – 2015.